Finally An Afternoon on the Water 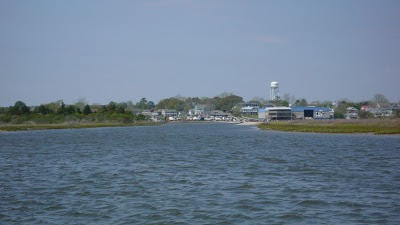 It has been a long wait for that first comfortable time on the water, but today the wait was over. A little after eleven AM this morning we pulled away from the dock behind our house. A few minutes later I was reeling in the first fish of the season. I was excited even though my first fish was a small croaker that I immediately threw back. It was not the last croaker of the morning. We must have caught close to twenty of them. They were all too small for anything besides bait. But for a few minutes, we were having a lot of fun just being on the water under blue skies on the relatively quiet waters of the White Oak. It was just great to be out on the water without a jacket and with the knowledge that the water temperature was in the sixties.
Many of us live along the Crystal Coast just because it is easy to get out on the water. About the only thing that keeps us off the water is cold weather, heavy rain or winds. This year we have had all three. We made one attempt at fishing on the river in March. The air was relatively warm that day, but the cold water kept us chilled.

Friday, April 24, was a nice warm day with almost no clouds. It was a nearly perfect day to enjoy the out of doors.

It did not start that way. When I first got up in the morning, I thought we were in trouble. The fog was impressive. You could not even see the river from our house which normally has a great view of the White Oak. Fortunately the fog was a temporary situation.

A little after ten AM, I headed off to get some shrimp for bait and some ice for the coolers. Before I left, I happened to notice that our high tide was a little less that I like to see it. I made a mental note that I needed to be back from fishing before 3 PM if I wanted to get the skiff back on our lift.

My trip to Clyde Phillips confirmed that we are still eating and using frozen shrimp for a while longer. The guys behind the counter said that fresh shrimp were still a few days in the future. On the way home, I stopped for ice at one of the ice vending machines.

While I was loading up the boat, my wife fixed a couple of roast beef sandwiches from her latest crock pot roast. My fishing buddy, Dean, showed up, and after packing a few more things, we headed towards the White Oak.

The night before when I called to plan our trip, we had decided to fish one of our favorite holes just outside Bluewater Cove which is near Hancock Point. We had some great luck there last fall. Friday morning we had our nice run of croakers, but they did not last very long so we pulled the anchor and headed to Swansboro harbor.

I am pleased to report that the buoys marking the channel down the White Oak are in good shape. Everything seems to be where it should be. The big red buoy just before the bridge is missing, but that is it.

There were only a couple of boats in the harbor. After a few casts while drifting in the harbor, we decided to try in the marshes on the south side of the Intracoastal. It is one of my favorite spots for a number of reasons. It is often sheltered from the wind. You can usually catch an interesting mix of fish, and if the fish are not biting, there are lots of birds to watch. We got several hits but did not land anything. Someone who had been fishing in the area motored by and told us he had only gotten one trout which was too small to keep. Since we were not having any luck and the tide was rapidly falling, we decided to head back to our home dock.

It was a great trip back up the White Oak, We had the wind at our back so it was a smooth ride. We did have to pull up just before we got to Red 16 where we turn for Bluewater Cove. Someone had anchored in the middle of the channel. It is hard to believe some folks have so little concern for other boaters.

While we were only out for three or four hours, it was just the kind of spring tonic that I needed. Since we did not use all our shrimp, my wife and I turned them into a meal of shrimp and grits. I know that I will sleep like a baby after all that fresh air and a great meal.

We are already planning our next boat trip which will likely take us to Bogue Inlet. It will be the first of many this year.

The picture in today's post was taken from the marshes on the south side of the Intracoastal behind Dudley's Marina but looking towards Casper's Marina.
Posted by Ocracokewaves at 7:52 AM