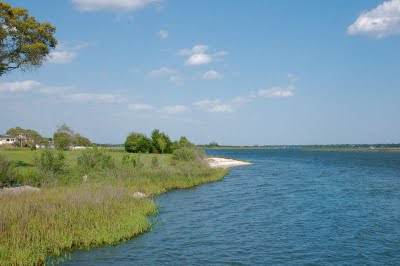 My first thoughts about this topic had nothing to do with Blackbeard's treasure. Nor did it revolve around our many miles of pristine beaches. The idea for the post came to me while driving up Highway 58 this afternoon when I saw the sign that the local strawberries were ripe at Buck's Corner Farm. It occurred to me that in the few years that we have been living here, there have been some special things have made life on the Crystal Coast unique. Having local farm fresh strawberries in the month of April happens to one of those things which I treasure. For many years we lived along Canada's Atlantic coast. Strawberries were something that you hoped for the first week in July. The idea that strawberries could ripe in April was completely foreign since the ground often still had some snow on it in April. There are a lot of other Crystal Coast treasures.
After we picked out a big box of strawberries, we headed off for another of the area's special treats, fresh shrimp. We stopped at Captain Sam's in Cedar Point. Given all the wind we have seen for the last few weeks, I was not surprised that they have not been out shrimping yet. We settled for some frozen shrimp from last season, but I know we will see some fresh shrimp in the next few weeks. A bowl of chilled shrimp, freshly prepared and local caught, are really hard to beat.

I suspect my next local treasure is going to cause some chuckles, but to me it is as much as part of the area as shrimp. You can actually buy them in hardware stores and even the drug store over in Beaufort. If you have not guessed yet, that treat happens to be the locally prepared peanuts that are done by Swansboro Methodist men. We have friends who enjoyed them while visiting. They take some home and the next thing we know they will call us and ask us to bring peanuts when we travel back to Roanoke, VA.

Now I might disappoint some folks but not naming collards as a local treasure, but I do believe that Bogue Sound watermelons qualify as local treats. We try to get at least a couple to enjoy each year. We have also taken them back to Virginia for Fourth of July parties. The watermelons are something the area can justly be proud of producing.

Not all Crystal Coast treasures are food. I think the White Oak River qualifies as a treasure along with Bogue Inlet. Both are very unique in their own ways. I have wonderful memories that both have created.

Of course one of my absolute favorite area treasures is the Point at Emerald Isle. It is unique in many respects and ever changing as we all know. I fished there with my late uncle over 40 years ago when you could only get there by lots of four wheel driving.

Then there are the azaleas that seem to thrive here along the coast. I think I saw an azalea today about one half the size of a house. While the color they bring lasts just a week or two, it certainly is the most color that we see in the spring.

Of course I could continue and come up with a few events that should included, but I will save that for another post. Today the strawberries and azaleas are at the forefront.

Actually I think that I will go have another strawberry before I slide into bed.
Posted by Ocracokewaves at 7:50 AM