Time To Stick Your Toes In the Water 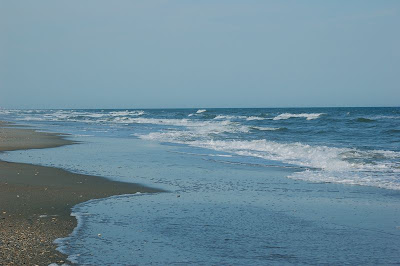 Today we saw some real warmth. Areas inland started cooking a little early this year. Northern Virgina, Maryland, and parts of New Jersey all reported temperatures in the nineties. We were lucky here along the coast. The water temperatures are still in the sixties so we got a cooling breeze off the water for most of the day. I suspect we barely made it to eighty. Today's warm temperatures were still a real treat. Before we made it over to the beach, I managed to go kayaking. In spite of a strong headwind, I paddled out to the White Oak River with little difficulty. However, it appeared challenging enough with the wind blowing so hard that a neighbor, who was headed out in a powerboat, offered to give me a tow. I declined since I always enjoy my kayaking exercise. Besides as it turned out it would have been a quick trip to nowhere since my neighbors only made it to the first buoy before turning around because of the choppy conditions.
My trip back in the kayak was a lot of fun and required almost no paddling. All I had to do was stick a paddle in the water to occasionally guide the kayak. Since my kayaking trip was cut so short, I convinced my wife that a walk on the beach was in order. We headed over to the beach and drove from Emerald Isle towards the eastern regional access.

I was surprised to see so many parked cards at the Eastern Regional access point. We decided to head on to "our private beach," the Third Street beach. It was deserted as usual. In fact we looking as far as we could see, there was no one to the left or right of the beach access.

Our real reasons for going to beach were so my wife could look for seashells, and I could take a few pictures. Third Street is actually a much better shelling beach than Eastern Regional Access. As is often the case, I managed to get my bare feet wet pretty quickly. While there was a little initial shock from the April waters, it did not take long for my feet to get adjusted and cooled by he surf. Still it is a little too early to get seriously wet.

A pretty good breeze was also blowing along the coast so we did not stay very long on the beach. We headed home where I managed enough early evening energy to grill some chicken for a salad that my wife had planned to serve for dinner.

After the grilling got started, I opened a browser on my computer only to see some amazing temperatures. It is not often you see temperatures in the ninety along the I95 corridor this early in the year. After enjoying our brief time over on the shore so much, I guessed that a lot of people north and west of us would love a few minutes on the beach to cool their bodies and warm their souls like we had done.

Tonight the air has once again cooled into the sixties, It is perfect sleeping weather, and I have many of our windows up. It won't be long before the house is chilled just enough so the covers will feel nice.

It is my one of my favorite times of year. If you have not planned your 2009 beach vacation, now is the time to get it done. Come early. The azaleas are still blooming, the local strawberries are ripe, and we will soon have the first of this year's fresh shrimp.
Posted by Ocracokewaves at 7:54 AM