The COVID19 Summer on the Crystal Coast 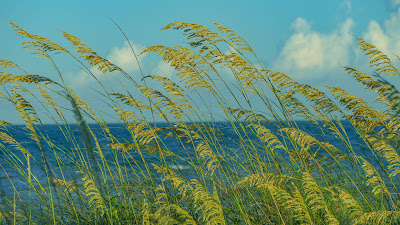 This has been an unusual summer in most places.  It is even stranger for those of us who live in vacation spots like the Crystal Coast.  We live in a place that others love to visit but this summer many of us are holding back from visiting places that we normally frequent because it might be dangerous. On top of that I sold our skiff. I have no regrets because of all the work a boat brings but being out on the water is also one of the few things that you can do with minimal risk.
While being on an uncrowded beach like this one at Third Street a few days ago is also one of the safer places to be, in summer we often make trips to Beaufort, the Maritime Museum, Fort Macon, and Hammocks Beach.  Now when we think twice going to a place, we usually end up not going. Since we live here, the thought is that we can visit later when most tourists have gone home and the danger to our health is less.
Our beaches are still the same beautiful places that they have always been, but the Coronavirus has made for an unusual Fourth of July.  We have had a hot dry summer with masks and on top of that Hurricane Isaias kept us on our toes for a while in early August.  My wife and I were not impressed that Isaias chose our anniversary to visit North Carolina's coast.  We were saddened by all the damage especially on Oak Island.
Unlike most Hurricanes, Isaias was stingy with the moisture.  We only got 1.5 inches of rain which is the same amount that we got the whole month of July.  This summer's lack moisture in July is the opposite of the summer of 2018 when we got twenty inches of rain from July 12 to August 4.  Our July dry streak shows no signs of disappearing this first week of August 2020.  August has brought plenty of storms but none have delivered the needed rain. It is too late for much of the county's suffering corn crop.
Still this has been a bountiful summer when it comes to gardens that could be watered.  Our spring garden gave us lettuce from the middle of March well into the last part of May.  We had homegrown tomatoes to go with with our beans from May 15 well into August. I attribute much of the success to my wife's careful attention to the garden and the rest to the compost that we make behind our home.
Ever summer brings it own set of delights and challenges. One of the delights of our summer has been four marsh kittens that we trapped back in the spring.  They have taken over our home as you can see from these pictures.  While my job has hot been impacted, I have taken some of my extra time and devoted it to cooking.  I think I have breakfast almost perfected.
If you need more information visit my Crystal Coast Life webpage.
Posted by Ocracokewaves at 3:07 PM No comments: