A Fine Sunset and Warmer Weather 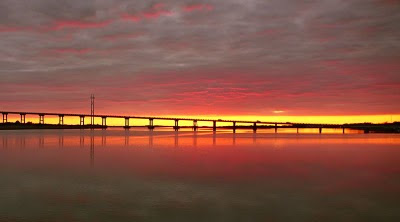 If you are dropping by Crystal Coast Living from a northern state, you probably are not very sympathetic to any complaining about our "winter" weather. Fortunately we are back into some better weather which means warmer temperatures. Still we have seen some ups and downs. Yesterday we went over to the beach at Emerald Isle to take some pictures. Since the temperature was over seventy four degrees Fahrenheit at our home about eight miles from the beach, I had followed my dress code and switched to shorts. It was great to get back in my standard uniform. It was still warm when we got to the beach, but I when I looked up the beach, I was a little concerned that Bogue Inlet Pier was disappearing into the fog.
Then I remembered the weathermen saying that a cold front was going to work its way through the area. When we lived in Canada, a cold front could mean several days of declining temperatures when your low temperature today became your high temperature tomorrow.

Fortunately on the Carolina coast, cold fronts are not nearly as serious, but they can bring substantial temperature drops. The one yesterday certainly surprised me. When we got to the beach, there was a little blue sky just off shore. As the cold front came down the beach, things got darker, then much cooler and foggier. Then the pier reappeared, and we started to adjust to the new temperature.

When we got back to the car, the temperature was fifty six degrees Fahrenheit. In just a few minutes, the temperature had dropped eighteen degrees. My shorts no longer felt so great much to my wife's amusement.

The good news is the temperature only dropped down to about fifty degrees last night. We managed to get back up in the mid-sixties today. Since my friends in Edmonton, Alberta endured temperatures of thirty four degrees below zero Fahrenheit this weekend, I am not going to complain very much about our highs only being in the sixties instead of the seventies.

I have also noticed that much of the country to the north of us seems to be enduring a series of winter storms. Our biggest problem to date has been the fog generated by the warm air over our cooler than normal waters. This morning there was an advection warning. I have heard of convection, but advection was a new one on me.

It turns out that it means horizontal movement of weather properties. In other words fog forming off the coast was going to be blown across the water to the shore.

We should be in the mid to upper sixties through the weekend. That qualifies as great weather in my book especially considering I will be waking up to snow on the ground Sunday morning just over three hundred miles from the coast.

If I could make it happen, December, January, and February would be months when my body never left Carteret County.

When I am down here on the coast, I know the odds are that we can see some seventy degree days even in January or February. When I am up in the mountains, I know there are even better odds that I can see freezing rain, sleet, or snow.

I would rather be betting on sunshine and blue skies.
Posted by Ocracokewaves at 1:48 PM