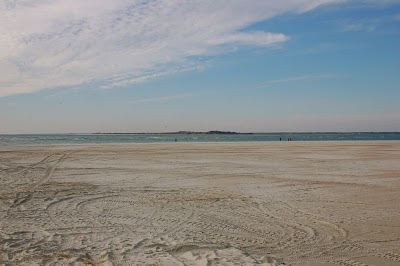 It should be no surprise to anyone that the sand here on the Southern Outer Banks moves around some each year even without storms. There are strong currents along our shore in certain areas. Some of those areas loose sand and some of them gain sand each year. One of the places along the Crystal Coast that is the most special to me is the Point over on Emerald Isle just off the intersection of Inlet Drive and Bogue Court. I first fished there around forty years ago as a teenager. At that time getting there required driving on the beach for a long way. In the fall of 2007, I decided that I was going to take my four wheel drive truck out on the Point and surf fish there once again. The easy part was going to get my beach driving permit from Emerald Isle.
After paying for the permit, we drove down to the Point to scope out the beach. Since it was perfect fishing weather, the area was packed with trucks. On top of that I had been so excited about the potential of driving on the beach that I had forgotten to bring any fishing tackle. I decided that my first efforts of driving on the beach could wait until it was a little less crowded.

We headed home, I got busy with some clients, and it was a couple of weeks before we got back over to the Point. In fact it was November 4, 2007. The Point was basically under water. As you can see from this picture, the only parking was for boats. The ramp eventually was damaged by high water, and part of it washed away.

I was pretty disappointed, but I heard much talk about how the beach around the Point was actually healing itself. I had great memories of how beautiful the area was in January of 2007 when I took the pictures in this web album.

All summer long we walked the beach in the area. The area which stayed dry at high tide gradually expanded. It was with great interest that we read in this week's newspapers that the ramp had been repaired. Some sand had also been piped in to fill the last spots remaining under water.

Early this afternoon before I retreated to my chair for the last afternoon of regular college football, we drove over to the Point to investigate. While the vehicle ramp was not open when we got there, the pedestrian access was officially open. As far as I can tell the ramp has been completely repaired. There is plenty of sand at the Point once again.

Though today was not a great day for pictures, this photo album shows how quickly the beaches can heal themselves. Click on any picture for a larger version.

I think the beaches running along Inlet Drive down to the Point are some of the nicest ones on Emerald Isle. I am glad to see them healthy again. One of favorite beach walks is to park at the small parking lot on the right on Coast Guard Road just before it runs into Inlet Drive. We then walk down to Inlet Drive and take a left until we reach the CAMA beach access boardwalk. It just takes a few minutes, and the beaches are well worth it.

These pictures from walking on the beach will give you a good idea of the area and why I think it is so beautiful.

I am looking forward to that surf fishing trip at the Point once again.
Posted by Ocracokewaves at 1:57 PM