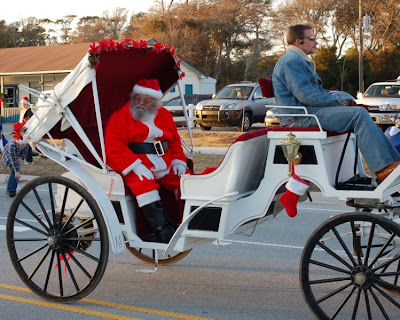 Finally we got to enjoy the Emerald Isle Christmas parade which had originally been scheduled for the Saturday after Thanksgiving when it was rained out. I love the Emerald Isle parade. It is just a great old fashioned Christmas parade with something for everyone. To me it is the kickoff for the holiday season here on the Crystal Coast. It has been a great week for parades. Beaufort had theirs earlier this week, and on Saturday morning Morehead City had their parade. It was nearly a perfect afternoon for a Christmas parade. The temperature which was forty eight degrees Fahrenheit as we came across the bridge was just cool enough to remind us of the holiday season.
One of the reasons I find Carteret County so wonderful is that it is such an unpretentious place. People just try to have fun and include everyone in the fun. There are not a lot of rules which make it hard to participate in most events. As a result everyone does have fun.

You could certainly tell everyone is included by watching the Emerald Isle parade. This was the fifth annual parade and people really do enjoy it especially the children.

I really enjoyed seeing the Wells Fargo stage coach with its team and beautiful boxer riding atop the coach. I think Bluewater's float was the best in the parade, but I might be just a little biased.

There really was something for everyone. I saw vintage Corvettes, beach buggies, golf carts, the Croatan High School Marching Band, horses, miniature horses, dogs, boats, fire trucks, motorcycles, and a number of floats. There were some important people in the parade. Unfortunately in my excitement I missed some of them, but I did get Santa who was there in a horse drawn carriage.

I posted lots of pictures of the event at my Picasa Web Albums site.

Also I managed to get movies of the parade up on the web. I have a short Quicktime movie of the beginning of the parade. If you do not have Quicktime, you can download and install it.

Or on the same web page as the movie, you will find in the right side bar links to three YouTube movies which cover the whole parade. Check the bottom of my web page for browser suggestions. Watch the YouTube movies in high quality if you have the bandwidth.

I loved seeing the Marines with their giant truck and the Toys for Tots advertisement. It is good to get a reminder since the last day for Toys for Tots drop off is December 16. All the Bluewater Offices are accepting the donations.

After the parade was over we stopped by Merchants Park for some hot cider and cookies. Then Mayor Art Schools showed up to light the town tree. Shortly before that Santa had been delivered to his red chair by the tree. He had switched his mode of transportation from horse drawn carriage to an Emerald Isle Police Department SUV. I guess he knew the children were growing restless.

Given how much candy was thrown towards the children lining the streets, I am glad that I do not have any little ones to tuck into bed tonight.

There were also several big children who managed to stuff their pockets with candy.

A great time was had by all.
Posted by Ocracokewaves at 1:51 PM