Some Cool Air on the Coast 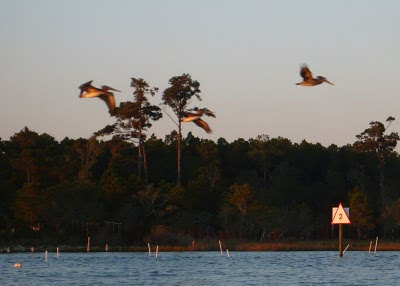 While I have been told that snow is a rare visitor to the Crystal Coast, we do get some cool air. On Monday we were out on the White Oak River fishing. A strong cold front pushed its way through. The waters were choppy, and we got some wind and a little rain. The weathermen warned that trailing behind the front by a few hours would be the coldest air of the fall. Sure enough this morning our temperature was down to forty degrees Fahrenheit in Bluewater Cove. By the time I went out for a morning meeting in Emerald Isle, the temperature was well over fifty degrees. However, our average low in October is usually in the fifties so a day when we didn't quite make it to sixty this time of year is very cool for the area.
We still haven't turned our heat pumps over to heat this year. When I got up this morning, the temperature in our home had dropped to sixty-six degrees. Since I knew we were going to have a sunny day, I chose to turn on our gas fireplace logs for a few minutes. By the time I had my two cups of coffee, the temperature in the down stairs living area and kitchen had risen to seventy degrees. My wife turned the logs off as she came into the kitchen for her coffee.

We enjoyed the sunshine all day, and the winds eventually dropped down. The warmth from the thirty minutes of gas logs was all the heat we needed today. Tonight as I am working up stairs in my office, the temperature is still seventy two degrees inside in spite of it being forty six degrees outside.

We still will not turn on the heat tonight. We will go through the same ritual tomorrow unless it is a whole lot cooler in the house tomorrow morning.

Our high temperature of fifty nine would have been a little more tolerable without the wind which we had for most of the day. Fortunately the winds seemed to weaken. They were more continuous and seemed to be stronger before the front went through yesterday.

We did have gusts of twenty miles per hour today which made that under sixty degree temperature a little cool.

So what impact did the cooler temperatures have? I did wear blue jeans today. I even put a coat on this morning when I went to get the newspaper, and the temperature was hovering near forty degrees.

I still grilled some chicken outside on the grill late this evening. The wind had stopped, and I was rewarded with a beautiful sunset over the river.

Considering places in Pennsylvania got eight inches of snow today, I will not complain too loudly about having to wear a jacket to get the paper. Even my college roommate on the New Jersey coast will barely see fifty degrees tomorrow and will have to contend with forty-five miles per hour gusts of wind. There are even flurries in the forecast for our second home of Roanoke, Virginia.

Actually our weather here on the Crystal Coast looks pretty good even if it is a touch of coastal winter. We will be back to the sixties by Wednesday. I even see that Saturday has seventy degrees on the forecast. More importantly next week we are back to the mid-seventies and shorts for a string of several days.
Posted by Ocracokewaves at 6:44 PM