Pansy Time and a Southern Winter 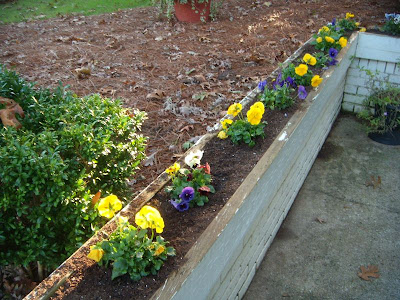 I can still remember the time when my northern colleagues heard me talking about planting pansies so my mother would have some outside flowers to enjoy during the winter. It mystified them that you could plant flowers and watch them bloom during the winter. Mother lived at the foot of the Blue Ridge Mountains in western North Carolina near the the Virginia border. Still her pansies thrived. She would sit at the kitchen table, read, and look outside at her pansy patch. It was a spot of color in an otherwise drab winter landscape. Having blooming flowers during the winter is just one of the many positive changes that northerners coming to Carteret County get to enjoy.

One of the first changes you notice as you come from the north to the Crystal Coast is that sneakers are our winter shoes. Needing boots for snow is something you can push out of your mind. Snow is very rare on the Crystal Coast and often disappears quickly if it does come.

If you want snow, you have to go looking for it. You might find some on North Carolina's highest mountain peaks, but often you might have to venture to West Virginia to find any serious snow.

This year we have already had some cool days, but I still expect that we will have some nice warm days that stretch into December. We have too much blue sky and sun for the temperatures to get cold very early.

Having spent years in Canada, I have a hard time calling our coldest months winter. The reality is that a cold day on the Crystal Coast is when the temperatures do not get out of the forties. We have some of those in January and a few more in February which is usually our coldest month. Fortunately they are usually interspersed with lots of warm days.

In January 2007, I kept track of temperatures. We had a grand total of 19 hours below freezing for the whole month. In addition we had eleven days when the high temperature went over seventy degrees.

What we called cold in Canada was when today's high temperature was yesterday's low temperature, and none of the temperatures were anywhere close to being above freezing. You know you are in a cold spot when you can unplug the freezer in the garage and not worry about it thawing for a month.

The other major change that northerners might notice on the Crystal Coast is that heavy coats are not required. I wore my "heavy" coastal coat twice last year. Most of the hikes that we did even in January required only a hooded sweatshirt.

A typical winter morning along the Southern Outer Banks might require that you turn your gas logs on for twenty to thirty minutes to take the chill off the house. After that the sun often takes over and warms our houses. Last year there were a couple of weeks where the heat pumps ran most of the time, but we only saw a few days when the temperature briefly touched the mid-twenties for a few minutes.

With weather like that, it is no surprise that getting the pansies planted is an important fall activity. One of the fun things that I did last year was drive around Swansboro in the middle of December and take pictures of all the flowers blooming. Then I stuck them up on a web site for my northern friends to enjoy.

It is a great way to get the attention of your friends up north.
Posted by Ocracokewaves at 6:48 PM