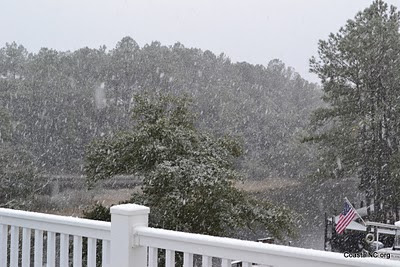 After listening on Christmas Day to snow reports from everyone to the west of us, we finally have a dusting of snow on Sunday morning, the day after Christmas.  Boxing Day is a  traditional holiday observed on the day after Christmas in a number of English speaking countries.  We were first introduced to Boxing Day in Maritime Canada where we lived for a number of years in the seventies and eighties.

The time after Christmas is always a time of reflection for me. Having a little snow on Boxing Day here on the Southern Outer Banks is just a good way to pull in some extra memories. Last year I wrote something of a season recap on December 4.

It is interesting to look back at that post and compare what I reported to this year.  Last winter was very cold, and this December has turned out to be very cold just as I predicted earlier in the month.  We have seen plenty of ice.  Even yesterday when I took our skiff out on the river on one of our rare warm days, our skiff ended up breaking some ice. I also found that the temperature of the White Oak River was down to 39.5F.

Considering our average high temperature in December is usually 58F while our low is normally 35F, this December has been very cold.  I believe we have had more days that did not reach 40F this December than we have had in the previous four winters combined.

Now here we are with a dusting of snow on the ground while our old stomping ground in a snow belt north of Frederiction, New Brunswick has bare ground for Christmas.

I do not really mind our coastal snow, we did not get enough to stick on the roads, and all of it will me.  All of the snow will melt quickly. Certainly it will gone by later in the week when our temperatures should be in the fifties.  I have even seen one forecast that has us in the sixties by the day after New Year's Day.

Of course that might be tempered by air flowing across all the new fallen snow to the north and west of us.  There is nothing like arctic chilled air to make you wish for that roaring fire in the fireplace.

I wish everyone to the north of us in path of the day after Christmas 2010 blizzard luck at coping with all the snow and cold.

I feel somewhat sorry for all the people about to be snowed in, but what can I say?  Some of us plan not to be snowed in and move to areas where snow is infrequent.
Posted by Ocracokewaves at 8:50 AM