Bare Feet on the Beach on New Year's Eve 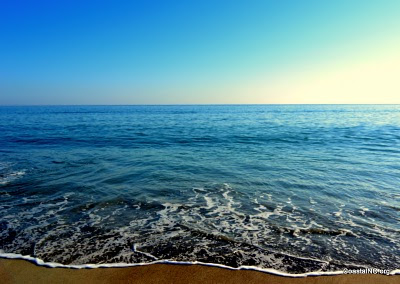 Today we even made it into the mid-fifties here on the Southern Outer Banks.  It was a real treat after all the cold weather, and I think most of North Carolina figured out that we are going to have a warm weekend.

At least that the way it seemed at Lowe's Grocery in Cape Carteret this afternoon.  I have not seen the parking lot that full since the height of summer.  We had to look for a parking spot, and the grocery store was a zoo.

The bread row had been ravaged.  We only needed a few things so once we got our checked out, we decided that Emerald Isle needed investigating.  If lots of visitors made their way to the beach, changes to the recent deserted state of the island would be very obvious.

Traffic was noticeable on the bridge. Then based on our Lowe's parking experience, we were not surprised to see the Food Lion parking lot a lot more crowded that one would expect for a normal winter Friday.

As I continued along Emerald Drive, the traffic was much more noticeable than it has been over the holidays.  There was a steady stream of cars headed onto the island instead the deserted highway that we have seen for the last week.

We continued east along Highway 58 until we got to the Western Regional Access.  It was also not empty as it has been in recent days.  There were actually several cars in the parking lot and a few groups of people on the beach.

There was absolutely no wind, and it was warm in the bright sunshine.  The waves were calm, and there were a number of people walking along the beach.  We really enjoyed our time in the sun, and I even ventured down to the water.

What really surprised me was that I saw two groups of young walkers going barefooted on the beach. While the air might have been in the low fifties, the ocean water is still in the low forties with the result that the recently wet sand would not be much warmer.

This has been a cold stretch of weather. It is something that I would like to forget as soon as the warm February sun can find me.  This morning we awoke to an early morning temperature of just over 30F.  On New Year's Eve both in 2008 and even in 2009 which no one would class as a warm winter, our early morning temperatures were in the fifties.  We are making progress, but it still slow digging ourselves out of the freezer not that the area waters are chilled to the upper thirties.

The only consolation that I can offer is that much of the east coast including Florida has been in the same chest freezer that has kept the Crystal Coast frozen.  The number of record low temperatures in the last few days is amazing.  There were also 539 new snow fall records set last week.

At least with our snow gone, we will be able to bask in the sixties for the next couple of days.  It is a start on a better weather pattern.  Any day in the sixties is one less day of winter.

Based on the number of empty boat trailers at Wildlife Ramp in Cedar Point, we are not the only hopeful people around.
Posted by Ocracokewaves at 6:35 PM