Wandering the Streets of Beaufort 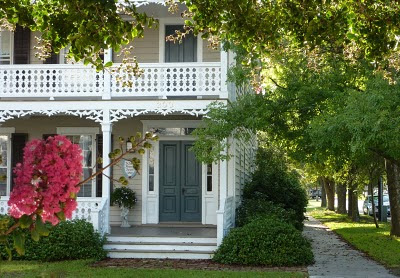 I cannot remember a month in the last four years when I did not cross over the drawbridge to Beaufort at least once.

We even like to go visit Beaufort during the winter. Walking down the boardwalk along the docks is always a pleasure. The only time I ever got cold in Beaufort was watching a December Flotilla at night.

I have been very hot in Beaufort a couple of times. There is almost always a breeze blowing in Beaufort except there are some August days when the wind cannot seem to find the streets of Beaufort.

So if there is a month that I would skip going to Beaufort, it would be August. Unfortunately, this August not only did I get to visit Beaufort, I ended up there three days in a row.

It is just now four years since we made the move to the Southern Outer Banks, and I guess my residency has caught up with me. I got called for jury duty.

Not only did I get called for jury duty, I got selected to be on the jury, and eventually ended up being the foreman.

I actually do not mind doing my civic duty, but doing jury duty in Beaufort comes with a few special challenges. The first is that there are no reserved parking spots for jurors. That means even if you come forty-five minutes early, you will end with a pretty good hike to the courthouse.

I ended up parking down Broad Street beyond Beaufort Ice Company. In the four years living here, I have managed to acclimate myself to the summer temperatures. However, staying cool in eastern North Carolina in August requires wearing shorts and tee shirts.

Being called for jury duty seemed to suggest that perhaps I should dress in what we used to call “business casual.” So I put on long tan pants and a short sleeved collared shirt. When I got to Superior Court which happens to be on the second floor of the old Courthouse, I found that most people were dressed similarly.

Only one gentleman was dressed in a suit and tie, and he managed to go home and change before the end of the day.

How I was so lucky to be picked as a juror out of the seventy people in the room, I will never know, but at least I am excused for the next two years.

Our second day there was Wednesday. We ended up having a lunch break, and I managed to make my way down to Beaufort Grocery. I had a nice roast beef sandwich for lunch and got back to the Courthouse in plenty of time to go for a longer walk.

I strolled down a few streets in Beaufort and eventually made my way back to the live oaks around the Courthouse. It was then that I figured out that I had gotten pretty hot in a nearly windless Beaufort with a strong sun beating down on the streets.

It was not hot like I have been in Washington, DC walking through the tunnel to the Pentagon in a wool suit at the height of summer, but I was warm nonetheless.

Before we left on Wednesday the bailiff warned us that there were 375 cases on the docket the next day which would make parking even more of a challenge.

I managed to get to the Courthouse at 8:45 AM for our 9:30 AM case. I still ended up parking down beyond the ice company. However, I did not mind the walk because I had decided that shorts were appropriate for jury duty. I figured the least I could do to render a fair verdict was to keep myself comfortable.

Since there was a lot of time before the trial I wandered down to the Old Burying Grounds and took some pictures for a friend who loves old cemeteries. I posted the Old Burying Ground pictures on my Picasa Web Albums site. I had hoped to wander around inside the Burying Grounds, but for some unknown reason the gates were still locked at 9 AM even though the sign indicated that they opened at 8 AM.

There are always some new shops in Beaufort, but I did not get a chance to investigate the couple that I noticed. We got sent to the jury room just before noon on Thursday. Before we could sit down, one fellow announced that he had made up his mind, and there was nothing we could say to change it. His statement immediately hardened everyone’s position. We ended up a hung jury and went home before lunch.

I did make enough trips to Beaufort this week to come up with a couple of interesting facts. One is that it consistently takes 35 minutes to get to Beaufort from our home in Bluewater Cove near Cape Carteret and the White Oak River.

The first twenty minutes of the trip gets you to the intersection of Highways 24 & 70. That part of the trip is around 18 miles. Most of the shopping we do is in that general area. That’s right where the Harris Teeter grocery store is located, and we come there for a few things we cannot find at Lowe’s or Food Lion near Cape Carteret.

From that intersection it is less than eight miles to Beaufort, but that part of the journey takes 15 minutes one way or the other. I tried both Arendell and Bridges St. The time to get to Beaufort was so close I could not make a call.

I am looking forward to getting back to Beaufort when I don’t have to worry about jury duty. I think if I am ever called to serve again, I might come by boat and solve the parking problem.
Posted by Ocracokewaves at 9:04 AM No comments: 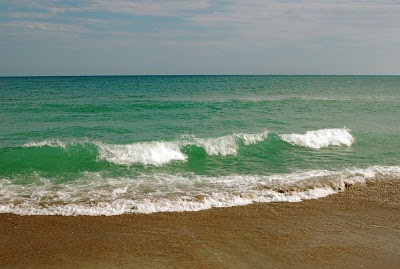 It is August the first, and the summer of 2010 is slipping away from us. Like most folks I have been so busy that sitting back and really enjoying summer has been a challenge. However, I am a hardcore summer person so you can be sure I have already created a few indelible memories that can keep me warm through the winter. Even more important is that there is still plenty of time left to have some fun and create some more of those memories that last well beyond the winter. I can still remember the boating trip from last summer when my youngest daughter finally fell in love with the Crystal Coast. An even older memory is our trip to Cape Lookout five years ago.  You have to do that trip differently now. Once you start the process of digging up memories, they tend to flow freely. The Cape Lookout trip reminded me of a wonderful fishing trip to Beaufort in the fall of 2005. Making memories that last is easy in a place like the Crystal Coast.
With so many wonderful things to do here at the beach, it is sometimes hard to choose. A good rule of thumb is that if you have never tried something before, you will likely remember your first attempt much more vividly than you will remember doing what you have always done.

A few weeks ago I took some friends out in our boat. It was a holiday weekend so I thought that we would just go for a short ride on the White Oak River. When I figured out that my friends had never been up the river beyond Stella, I decided that they needed to see the river above the point where all the homes disappear. We made it up the river ten miles beyond Stella. By the time we came back down the river and took a run down to the Intracoastal and then home to Raymond's Gut, we had gone about thirty-eight miles. From the comments from my friends, I suspect they will remember that ride for a long time.

We have made lots of special memories with our granddaughter who will turn two next weekend. She had her first birthday party here on the coast last summer. Then there was the time we took her to the beach for the first time. I can still see her standing in the waves with her grandmother holding one hand and her aunt holding her other. We will be creating a whole new set of memories when we host her second birthday party next weekend.

Some memories are priceless like the time one of our daughter's visiting dogs got a little too close to a fiddler crab. The dog weighs nearly one hundred pounds. The crab latched onto the dog's lip. That caused the dog to run towards my daughter who could only see this creature of the deep dangling from her dog's lip. Our daughter started screaming and running from her dog. The faster she ran, the harder her dog tried to catch her. Fortunately, her older sister tackled the dog and removed the crab. By the time the crab was removed, we were all doubled over with laughter.

There is plenty of room on the beach to write your own memories in the sand. You can create a memory in an afternoon. Your memories can be anything from a group kayak trip to a leisurely ride over to Hammocks Beach on the state's pontoon boat. Even a family outing to play miniature golf or walk the docks in Beaufort can turn into a memory makes you smile each time it slides into your consciousness.

The important thing is to seize the opportunity to make some wonderful summer memories while there is still time left. The summer of 2010 will only roll around once for us, and even now there are just a few weeks left before it will be time to create some of those fall fishing memories for this year.

Now that I am thinking about fishing, my mind is pulling up my first fishing trip on the Point with my Uncle Austin. I think it was the summer of 1969. We did not catch much beyond a horseshoe crab and one bluefish, but I am pretty sure that was the trip that sealed my fate and eventually made a Crystal Coast resident out of me.

Both the memory and the reality are pretty nice on that one.
Posted by Ocracokewaves at 8:42 AM No comments: