A Cruel December on tap for the Crystal Coast? 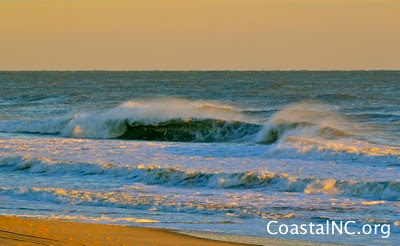 It must be time to hibernate.  After Tuesday's high temperature of 76F and a Wednesday morning wake-up temperature of 68F, fresh chilled Canadian air seems to have found its way to the Southern Outer Banks.  Still it has been a fall to remember.  The weather until now has been great.

I still find it hard to believe that we were able to be on the water so late in the fall without any heavy coats.   From my reading of the December forecasts, it looks like we might pay dearly for all that nice weather.

Of course with December arriving, the number of people visiting has dwindled, and even some of our permanent residents are off traveling for the holidays.  When we visited Trattoria in Swansboro for lunch yesterday, we were the only people there eating at just after 1 PM.  Today we had lunch at Andy's in the Emerald Plantation Shopping Center just before 2 PM.  Once again we were the only folks enjoying the food.

Normally December is not a bad month for us.  The folks at Weather.com have the average daily high temperature for the western part of Carteret County pegged at 58F.  Looking at the fifteen day forecast from Accuweather, there is only one day in the next fifteen when we will be at or above the average high temperature.  Nine of the days have us at a high temperature below 50F.  There are also nine evenings when our low temperatures will be in the upper twenties.  That is serious winter weather for the Crystal Coast.  Even in January our average low temperature is 35F.

The only silver lining to this cold weather is that long term winter forecast from Accuweather is "not much winter."  Considering how much snow that I shoveled in the Virginia mountains last winter, I could use a break.  Pictures from my first efforts to clear the big December storm to when I finally got a driveway open provide a good idea of how much snow I moved last year.  It was an impressive storm, and I hope that I don't see another one like it for a while.

That snowy winter of 2009 is one of the reasons that my love for living on the Crystal Coast has gotten stronger.  Snow rarely visits the Southern Outer Banks, and even when it comes, it almost never needs shoveling.  For those in Buffalo and other areas suffering under a blanket of snow that requires snow blowers, my sympathies go out to you. My seventeen years in a Canadian snow belt and twenty years in the Virginia mountains have given me an understanding of your frozen pain.  However, I have seen the warmth of the Carolina sun, and I can tell you that there are better ways to spend your winter than shoveling snow.

Once we get through this extraordinary cold of the next couple of weeks, I plan to come out of hibernation.  Until then I will plan my activities accordingly and wear lots more clothing than we are accustomed to using here on the coast.

Stay warm, spring is not that far away.
Posted by Ocracokewaves at 7:42 PM