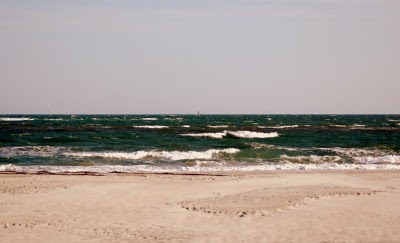 One of the great things about living on the Crystal Coast is the weather that we get to enjoy. For the most part we have a very moderate climate with weather just cold enough so that you can have a taste of winter. For the first time in years back in February, we actually had a few inches of snow on the ground for a couple of days. No one was very upset with the snow since it is such a rare occurrence. In spite of snow visiting some northern areas recently, spring has been here for a long time. I planted my tomatoes on March 24, and there has not been any frost since then here along the water. Still It was just last weekend that area strawberries started appearing on local produce stands. Spring was a little slow arriving, but after its arrival, spring is hanging around when most of us would like to see some real warmth.
Yesterday I had my wife drop me off at the access to the Point at Emerald Isle. I wanted to walk out and see how the added sand from this winter's dredging looked. In the distance I could see a handful of four wheel drive vehicles parked and their occupants working to catch some of the first fish of the season.

It is only in the best of times that the waters at the Point are fairly calm. Those are the days on the water that we really cherish. Yesterday's waters off the Point were probably calmer than they had been earlier in the week. The picture with this post are the waters just off the Point snapped on Thursday of this week. Based on the winds early in the week, the waters look pretty good.

On Monday we took some visitors to Beaufort. On our way back down the beach, we stopped at the Iron Steamer beach access. I walked out to the beach to take a few pictures. When I left the car, my visitors were following me. It was very windy on the beach. I took a few quick pictures, and then I turned to look for my friends. They were nowhere in sight. I thought perhaps they had taken the boardwalk entrance while I had followed the vehicle entrance. However, some searching failed to turn them up. As I turned to walk back to the car, I could see them already back in the car. I guess they found the sand blasting of their ankles a little uncomfortable. I had hardly noticed.

It was just one of those days in the spring when the wind is blowing enough to keep almost all the boats at the dock. We had seen a few boats moving around in Beaufort's sheltered harbor, but most people were wisely staying tied up at the dock.

While the winds have made going out on the water challenging, it has been a pleasure watching the land warm up. My tomatoes are growing well, and I even have one that is the size of a hen's egg. I have enjoyed the area's beautiful azaleas and now the knockout roses are coming on strong. This morning when I was walking back from the mailbox with the morning's newspaper, I paused to enjoy how green things are here on the land.

While we are waiting for the area's waters to warm, the seas to calm, and the winds to die down, it is truly a pleasure watching spring unfold. While part of me would like to rush spring so that I get my boat out into the water, another part of me knows that I need to slow down and enjoy this part of the year. The temperatures at night are perfect for sleeping, and the heat pumps hardly run. It is a time of the year on the the Crystal Coast when we know that the best is yet to come. We will have plenty of heat soon enough. Likely we will be wishing for cool air before June gets here.

In spite of all that, I can hardly wait for that heat, and temperatures into the eighties this weekend are not going to make it easier
Posted by Ocracokewaves at 7:33 PM