Dreams of Summers Past 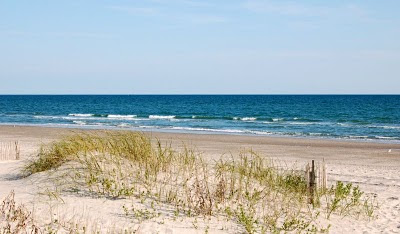 Finally the beach vegetation is showing signs of life. The light green beach grasses as you walk onto the beach are a welcome sight. This time of year I like the grasses more than the blue water which I know is still a chilly sixty-five degrees. Even the marsh grasses in Bogue Sound are turning green. With that happening, it will not be long before the Crystal Coast is a paradise of blue and green with golden sunsets. When Spring gets to this point, it is one of my favorite times. The temperatures during the day are nearly perfect with a warm Carolina sun, and at night we often have cool temperatures which make for great sleeping weather. Also while the fresh strawberries have come a little later this year than in the previous few years, they herald the beginning of the fresh local produce season. All this is enough to start me dreaming about past summers.
The one thing that is certain about the weather is that it is uncertain. Our first summer here the cool spring like weather lasted almost to the first week in July. Another summer we had some of the hottest weather of the season the first week of June when temperatures rose into the low nineties which is about as hot as it ever gets around the Crystal Coast.

Today in spite of the strong winds, the temperatures managed to get close to eighty degrees. After church I was working in our yard, and I got hot. Then two hours later the temperature dropped ten degrees as a front went through, and the winds picked up. By the time we went out to dinner with some friends, it was even cooler and some fog had formed. Later when we drove over to the Emerald Isle Food Lion for some eggs and English muffins for breakfast, the air as we got out of the car felt like a warm spring evening. More importantly it smelled like the beach in summer. In the winter you do not get the same experience.

With everything looking and smelling like spring, it is easy to start dreaming about some great some days on the water and on the beach. One that sticks in my memory is last July 15 which I deemed a perfect beach day. The combination of the water, the sky, and the temperature was as good as it gets. As a photographer I found the rich colors that day just amazing.

Actually it was only last June when we got an early spell of warmth which convinced me to take my first dip of the year. The temperatures were warm enough that the still slightly cool salt water felt great. That warm early June day has also stuck in my memory.

There are lots of memories from last summer that are set to soon be triggered. We just got our first green tomato. It has me thinking of those first tasty tomato sandwiches which I hope we will be enjoying the first week of June.

Last Friday we took our first ride down the White Oak River where I got to wear shorts and a tee shirt. I felt like I was really back out on the river. Conditions were not perfect, but I always think the first warm weather trip on the water is special.

It will not be long before we catch the first fish of the season. That reminds me that I should go get my fishing license renewed before that first fish gets on the hook. If the winds will drop down some this week, I might just put the kayak in the water. It was just a couple of years ago that I caught the first fish of the year from my kayak. It was a nice flounder that I caught just at the mouth of the Bluewater Cove inlet. I had it cleaned, cooked, and on our plates just a few minutes after it was caught.

Fishing and life at the beach do not get much better than that. Late April is a great time of year to be enjoying the Crystal Coast and remembering great times from previous years.

Posted by Ocracokewaves at 7:35 PM