What Makes a Vacation Memorable? 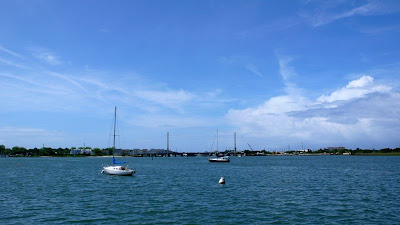 We all come to the beach with different agendas. Some folks come specifically not to have an agenda. Others have a definite list of things that they want to accomplish. We just hosted our daughter from Northern Virginia. She called several days ago, and she told us that she just needed to get out of the big city. Our family B&B does that very well. In our cul de sac on most nights you can see more stars than most people could dream. The only noise happens to be frogs, and they are random. My daughter has visited us a number of times, so she came with a few things on her list. One thing was to sit on our upper front porch and read a book. Another was to go for a boat ride. She also was counting on an evening walk on the beach. Beyond that she wanted to have a very restful nap., It is interesting to see how her visit worked out.
One of my jobs when we have visitors is to cook at least one hearty breakfast of bacon, eggs, and toast. Since we had planned a boat ride for the first morning, we had our substantial breakfast the first morning. We had a relaxing breakfast until the last cup of coffee was gone, but still we managed to leave our dock at about 10 AM. I considered that pretty good since we had been up until midnight the previous night waiting for my daughter to arrive.

Our boat trip was just a short one but it allowed us a nice ride over to the marshes on the other side of Intracoastal Waterway at Swansboro harbor. It was a very pleasant out on the boat. I am pleased to report that my daughter enjoyed it greatly.

Since we got back well after noon from the boat ride, we decided on a late lunch at Jordan's. My daughter said earlier that you cannot have a proper beach visit without some fried Carolina seafood. I had a nice plate of flounder and oysters to support her statement.

That evening we tried to work off a little of the Carolina seafood by going for a walk on the pier at Bogue Inlet. This was a new experience for my daughter, but I always enjoy walking on the pier to check the pulse of the community. That evening we got to watch surfers and young couple strolling along the shore. There was also a good cross section of humanity on the pier, fishing and watching the fishing. I did point out to my wife that a number women seemed to have their hands on fishing poles.

Next morning we ened up at Yana Mama's for pancakes for the ladies. After breakfast we visited the shops of Swansboro. Another thing on my daughter's check list was a visit to shop on Front Street that carries, Vera Bradly purses. She had a goal of getting her mother's day shopping out of the way. It took a while to accomplish that mission, but we did get it done. That afternoon I had to work some so I think there was serious reading done at home.

When I got home everyone wanted to ride over to the beach which we did. After checking out the sights, we ended up at the Captain Willis Seafood Shop. They were slicing up some beautiful salmon; so we took home a piece to go on the grill. A friend had given us some homegrown Romaine lettuce. I had an errand to do in River Oaks Plantation. While I was in visiting with my client, my wife and daughter decided to walk the subdivision. Apparently they had a great walk except for a disagreement with three Canadian geese at the boat ramp.

After we got home there was just enough time to relax a little before grilling our salmon. It turned out to be very good, and the meal prompted us to head over to the beach for a walk. We were fortunate that much of the day's traffic had disappeared. We stopped at the Western Regional Beach Access and walked until a little after 8 PM. There were still people on the beach when we left.

Sunday morning was oatmeal in the crock pot and a trip to Beaufort to try to catch the NIna and Pinta. When we got there, we figured out that they had canceled their trip. We made it back to Cape Carteret in time to show my daughter a neat home in Cape Carteret that we had seen on our real estate caravan that week. After that I headed off to work while my wife and daughter headed home to get her packed up for the trip back to DC.

My daughter was still at the house when I got there a little after 5 PM. I guess she had finished her list by taking a long nap before the seven hours drive back to DC.

I think her beach trip was a success. There were a lot of moments that went into making it memorable. I suspect the altercation with the Canadian geese will be a lifelong memory.
Posted by Ocracokewaves at 8:01 AM