Our Season Is on the Horizon 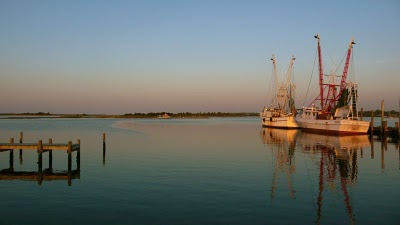 It is hard to believe that I was standing on the beach on Saturday and wishing that I could ditch all my camera gear and go for a swim. Today I had to switch back to bluejeans and a long sleeved tee shirt in order to stay warm. As I wrote in this post predicting nice weather for the weekend, there are detours along the road to summer. This recent cool weather is one of them. It seems as summer gets closer, I can almost feel the warm wind on me as we head down the Intracoastal Waterway and make the turn to go out Bogue Inlet. Perhaps being deprived of the chance for some early season boating has made the memories even more vivid. We will soon have days as nice as this one pictured when the sunrise was shining on the shrimp boats at Clyde Phillips (photo taken June 3, 2009). Already more people are over on the beaches. The changes are coming as beach season arrives.
Even today the Emerald Isle Food Lion, which has slumbered through the last several months, was a beehive of activity for a few minutes. It was just a preview for what we can expect this weekend.

In fact Saturday over on the beach felt like summer to me. There were folks in the water, the sun was hot, and people were having a great time. Gas prices also jumped a few cents over the weekend. It looks like summer is here to me. If we can just make it through one more cool day, to Wednesday, the temperatures will climb back into the seventies. That should get us back on the road to summer.

I am certain that we will not go into summer worrying about drought this year. We have had our fair share of moisture. Gasoline, while rising in price, is still much more reasonably priced that it was last summer. As far as I can tell, aside from the construction to replace the fire damaged Valero gas station on Coast Guard Road, Emerald Isle seems ready for visitors.

The extension of the bike lane a little ways down Coast Guard Road has been completed. The beaches look great. The access to the Point has been repaired, and the pedestrian access is open and ready for bare feet.

Area restaurants have been going steady all season. There are few new ones around, and I am sure that all will be busy this weekend. I have just seen advertising that what was once Gourmet Cafe is now a new Mexican restaurant.

Since last season, Swansboro has completed its new Riverwalk Park. There are now some nice boardwalks down on the north side of Highway 24 by the river. They also have a brand new picnic area just off the parking lot. It is across the road from the First Citizens Bank. I was impressed to see an accessible picnic table which can be used by someone in a wheelchair.

I understand that dredging has been completed over to Hammocks Beach Park on Bear Island. Of course other places have not been dredged. So as usual, boaters need to pay attention. If not they might be doing some pushing to get off of some new sandbars.

During the winter Emerald Isle finished up their accessible ramps at both the Eastern and Western Regional Accesses. Each has a nice platform. If you want to look at beach without getting sand between your toes, the new platforms are just the ticket.

Up Beaufort way, the newly renovated boat ramp and kayak ramp at the far end of Front Street has opened. I have heard that the parking lot has even been paved.

Since last season, we have added a new Harris Teeter grocery store in Morehead City along with a Panera, another Dunkin Donuts, and a Chick-Fil-A. A new Quiznos recently opened in Cape Carteret.

I think that our ducks are all in a row. All we need are visitors and some great weather for them this weekend. For my sake I would like for the fish to be biting on Thursday and Friday of this week. As long as the wind is not blowing, I plan to be fishing then.

That will be a great way for me to personally kick off the summer beach season. It is about time.
Posted by Ocracokewaves at 8:05 AM