Back To Normal at the Beach 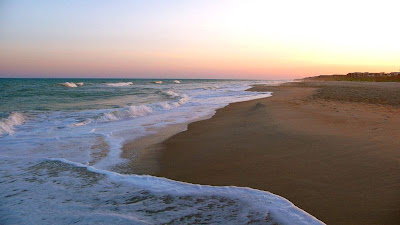 I have to admit to being impressed by the number of visitors who showed up for Memorial Day weekend. We did venture over to Emerald Isle during peak time on Saturday. I guess we were lucky it only took us an extra six or seven minutes to make the trip to the stoplight where you turn to go to Bogue Inlet Pier. I heard that there was an accident on the bridge earlier Saturday morning that caused a lenghty delay. I can understand the frustration that some people might feel getting caught on the bridge. I look at it a little differently. When they are working on the bridge, I will often make extra trips hoping that I get stopped on the bridge so I can take pictures. Aside from the accident on the bridge, I have not seen reports of any other problems. Of course on Tuesday it was like the tide of people had receded, and things were back to normal.
When we were in the stop and go bridge traffic on Saturday, my wife counted nine boats in the Intracoastal on the east side of the bridge, I counted five on the west side and saw two sea-doos in a channel headed to the ICW. Tuesday when we made the same trip, we saw a total of two boats.

My holiday boating was confined to Friday morning, but I talked to several people who did put their boats in during Memorial Day weekend. No one seemed to think the waters were overly crowded.

When we walked the beaches on Saturday night, we were impressed with the number of people still out enjoying the water at 8 PM.

Of course the number of people on the beaches has also dropped. The biggest difference has to be the grocery stores. They are back to being almost empty. It was nice to see everything very busy over the weekend, but it is also nice to catch our breath before the next wave of visitors shows up.

Storms have been crossing the area for the last few days. They are expected to continue through Friday night. Then things are to clear up, and the weather looks to be fantastic through at least the middle of next week.

Last year I went for my first ocean swim on June 3rd. We had been through some much warmer weather last year, but I am still hoping to duck my head in the water next week. When I get really hot, my formula for cooling off is simple. I position myself so that an ocean wave will smack me right in the middle of my back. That has never failed to cool me off. Of course I have also been flattened a couple of times.

As we move into the first week of June, we will see an increase in people staying for a whole week. Fishing should pick up also. Our next wave of area vegetables should be on us as the tomatoes soon start to ripen. The strawberries might be finished this week, but I will actually trade strawberries for a ripe tomato and some sweet corn any day. The local sweet corn will take a little longer, but it will be worth the wait.

Another week of busy grocery stores on Friday through Sunday should firmly push us into our summer rhythm of shopping from Monday through Thursday.

There was one more sure sign of summer and of things returning to normal. Some fresh shrimp were brought in during the last week. We fixed some delicious ones Wednesday night. I am already looking forward to my next batch of shrimp and some more beach visitors.
Posted by Ocracokewaves at 7:58 AM