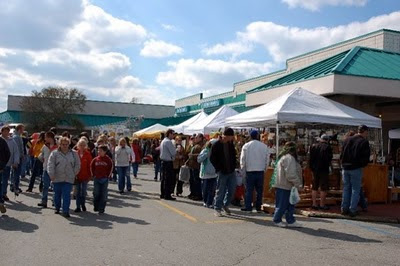 My two favorite spring festivals for our area of the NC Crystal Coast are scheduled for the next two weekends. The first one on tap is the Saint Patrick's Day Festival (pictures of 2007 event) sponsored by the town of Emerald Isle, and it takes place this weekend. it is a fun afternoon for a whole family The next is the Annual Oyster Roast sponsored by the Rotary Club of Swansboro, and it scheduled for Saturday, March 21. There is no better place to eat steamed oysters.
The Saint Patrick's Day event is always a great time to wander through the booths which take over Emerald Plantation's parking lot for this one day event. Some years it is a little cool and damp, but you can be sure that everyone still will have a great time. In 2007 it was cool enough that they had outdoor heaters, but I have found the crowd helps to keep everyone warm. There are plenty of crafts and lots of festival food including some of the best barbecue that I have ever enjoyed. It was chopped right in front of my eyes.

There are also a number of exhibits by local organizations. The Saint Patrick's festival is just a good way to get our on a Saturday afternoon and enjoy some family oriented fun. Parking is along Emerald Drive and side streets. The walk to the event is a good time to enjoy early spring.. As I remember from the last two years, there should be a beer and music tent for adults and lots of rides for the kids. Last year there was a bagpipe band from Wilmington, There was also a climbing wall and plenty of interesting uses of green on the human body. The event runs from ten to five pm this Saturday, March 14.

Next Saturday starting at 5 PM is the Swansboro Oyster Festival and Pig Out. It is held in the Swansboro Rotary Civic Center across from Highway 24 from Mills and Thomas. Tickets are $40 before the event and $45 at the door. You can expect a large line already in place even if show up at five PM, but the good news is that the line moves quickly, and the food is well worth any wait.

Until my first Oyster Roast in 2007, I had never been in a room filled with tables designed to eat steamed Oysters. I took a lot of behind the scenes pictures of how the Oysters got from the bags, to the steamers, to the tables, and back to the front end loader bucket and on to the dump truck where they'll eventually go back to the water. The photos are on a website, "Swansboro Oyster Roast & Pig Out." In ranking great community parties, I would have to rank this one high on the scale. I ate some of the most delicious, huge, plump Oysters that I have ever had the pleasure to enjoy.

They were wonderfully salty and in my humble opinion did not even need butter or any kind of sauce. I had more than one perfect steamed Oyster. There was plenty of other food, including Barbecue, Hot Dogs, Fried Flounder, and Clam Chowder for those who don't enjoy the challenge of prying the treasures of the sea from crusty shells. There was even a dining room with chairs for the regular plate food.; It is helpful to bring your own Oyster shucking knife and rubber coated gloves t0 handle the steamy oysters. A hand towel also makes a nice accessory as does a non-oyster eating wife who can act as a beer runner. You can buy the tools for shucking at the event. They also have some great tee-shirts.

I met some really nice folks who had just moved to the Swansboro which happened to be where the wife grew up. Her father had even driven 120 miles from Lumberton, NC to act as a guide for their first Oyster Roast. I even met someone from Mount Airy, North Carolina which is my home stomping grounds. I got some great advice from the father who told me to stop eating Oysters at the moment that I felt like I could eat just one more. I know in 2008 that advice allowed me to leave the event feeling great.

It takes a tremendous amount of community effort to pull off events like the Oyster Roast or the Saint Patrick's Day Festival in Emerald Isle. All the community spirit just adds to the spirit of the festivals.

Events like these mark the turning of the seasons, the time when the earth and sea are awakening with the warmth of the sun. I saw bait fish in the channel behind our second home this week. With that and the Bradford Pear trees along with other spring trees showing their blooms, I guess we have made it through another winter, and it is time to celebrate.
Posted by Ocracokewaves at 7:06 PM