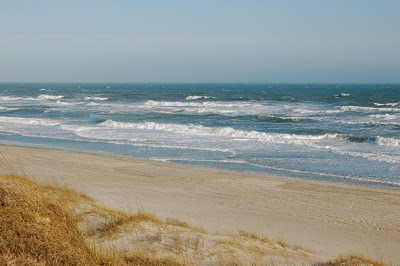 If you live on the coast, you get used to the weather changing quickly. We have had some nice warm weather recently, and I have enjoyed getting back into some shorts. For the last few days we have been getting some warm, much needed rain. I would much rather have some rainy weather now so the vegetation can turn green and diminish the risk of spring brush fires. Today the weather changes came quickly. This morning when I walked out to get the Sunday newspaper, it was warm with a little fog. While we were having breakfast, rain lashed the south side of the house. My commitment to attending church was beginning to waver, and then the rain became just a light mist.
Just in case we got a quick downpour like we did yesterday afternoon, I stuck an umbrella in the car as we headed off to our church, Cape Carteret Presbyterian. The drive from our house in Bluewater Cove is only seven or eight minutes.

By the time we got to church, the sun was trying to come out. A little over an hour later when we came out of church, the skies were blue and the wind was blowing. It was as if someone had switched our cloudy weather from the last few days for something completely different.

We went straight home, and I noticed the temperature was getting pretty close to seventy degrees. As we pulled into our driveway, I saw my neighbor walking in his backyard in shorts. It did not take me long to get out of my church clothes and into shorts.

With the wind blowing straight up the river, I decided to raise the lift holding my boat up a foot or so just in case we got some high water, but before I did that I dropped our skiff into the water and ran the motor for a few minutes. I try to do that at least once a week. If nothing else it is a great opportunity to imagine that I am out on the water. Today, however, I could see the whitecaps on the White Oak River from my boat so I was happy to be sitting on the lift.

After lunch we had a few errands to run. One required a trip to the Ace Hardware on the Island to buy some screws for a sign to go in the yard of a new listing. I noticed that when we got over on the island that the wind was even more impressive than it was on the mainland.

We made a stop in Lake Arthur Estates just off Bogue Loop Road. I placed the for sale sign and noticed that the wind was hardly blowing back in the forest. We headed off to take some pictures of a waterfront listing on Goose Creek Loop Road. I was surprised to see the water in that inlet quieter than it was in the White Oak. It is all in the wind direction. What is a windy spot one day will be quiet the next.

After getting some pictures of the cute waterfront home, we headed off to Belks in Morehead City for some quality shopping time. Any shopping time over five minutes is usually too much for me unless the shopping is taking place in a fishing tackle store. However, my wife wanted my opinion on some clothes she had looked at the previous day. I traded my opinion for an agreement that we ride back down the beach after the shopping.

The shopping was relatively painless, and we were soon heading across the high rise bridge from Morehead City to Atlantic Beach. If there is one place that you can feel the wind it is on one of the bridges over to the beaches. I have no doubt that we experienced the twenty to thirty miles per hour gusts while on the bridge.

I wanted to swing into OBX Outfitters Store which is having a going out of business sale in the Atlantic Beach shopping center, but it had already closed for the day.

As we headed out of Atlantic Beach, I started trying to decide where might be the best place for wave pictures. The waves looked pretty impressive as we drove by Iron Steamer Beach Access, but I wanted a higher perspective so I decided on the Roosevelt Access Point in Salter Path. As it turned out, the light was not right for wave pictures there. However, I did get some great live oak pictures. We also got a serious dose of wind when we walked out the board walk to the beach.

Not only was the wind strong, but the air coming across the water had something of a chill to it which is not too surprising since the water temperatures are still in the mid-fifties.

We drove on down the beach to the CAMA vehicle access just past where Squatter's Restaurant used to be in Salter Path. The picture in this post was snapped there. After that we headed home. It was a nice afternoon made even better by the wonderful aroma of the beef stew cooking in the crock pot when we walked into the house.

When I came upstairs this evening to write this post, I found the sun had warmed our upstairs to almost eighty degrees. I ended up opening several windows, With the temperature outside at fifty-nine degrees, things have cooled off nicely in my office.

I wonder what the weather will have in store for us tomorrow? My guess is more wind. It is the time of year for it.
Posted by Ocracokewaves at 6:42 PM