The Siren Call of the Waves 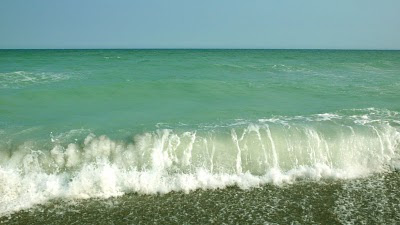 Now that the weather is warming enough to go for beach walks, it is time to admit that I am addicted to watching the waves along the Crystal Coast. I have thousands of wave pictures, but I continue to snap new ones each time that I visit the beaches. I long ago decided that there is no perfect picture of a wave. However, there are many that are worth enjoying over and over. A beautifully colored picture of a wave crashing on the sandy shores can transport me right back to the middle of summer. I can feel the heat of the sand and the warm breezes. In early spring I have to be careful because I have gotten carried away, changed into shorts, and headed to the beach only to end up wondering what convinced me that the temperature on the shore had warmed enough for shorts.
After what most people are calling the coldest winter on the coast in six years, I think the anticipation of spring is building among all of us Crystal Coast dwellers. We all want to be on the beach feeling the warm water from the waves on our feet.

My wife and I recently took a trip to the mountains of Virginia. One would think that the mountains would be behind the coast when it comes to spring, but just as it is this year, it usually turns out that spring comes quicker to the inland areas and foothills of the mountains.

When we left on our trip, we had only gone a few miles inland before we noticed that the Bradford pear trees were close to full bloom. By the time we got to Raleigh, they were in full bloom.

This weekend when we were heading back, we stopped in Mount Airy, NC and visited our family's former home which is now a bed & breakfast. I was amazed at how many trees and flowers were blooming.

Seeing those beautiful flowers reminded me that we are less than a month away from the gardens at Tryon Palace hitting their peak. Last year we were there on April 20 and really enjoyed our visit. Only the tulips were past their peak. The flowers were just amazing.

As I look at the wave picture with this post, I am also reminded of our friends from Boston who visited us in April a couple of years ago. They made a long trip down through Assateague, Nags Head, Hatteras, and Ocracoke before ending up on doorstep. They had faced forty five degree temperatures and high winds until they got to Ocracoke where it warmed to the fifties.

We were lucky and managed to provide them with three consecutive days in April with the temperatures over seventy degrees. Their frozen northern souls could not get enough of the beaches. They were even wading in the still chilly April waters.

The same friends were amazed that were getting fresh strawberries in April and that our tomato plants were already in the ground.

As this week warms toward the seventies, I am keeping that wave picture in my mind while thinking that spring is getting here slowly but surely.

I checked the other day and the strawberry plants are blooming.

I know for sure that it will not be long before I am dancing on the hot sands of the beach while trying to take more wave pictures.
Posted by Ocracokewaves at 6:45 PM