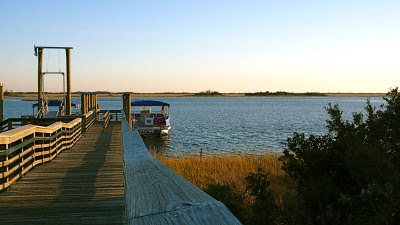 It is only in recent years that coming to the beach for the holidays has become popular. It has become a tradition with some families. I suspect the holiday beach trip has a lot to do with how easy it is to drive to the beach. The four lane highways with fast food available at almost every interchange is far different from the experience that families faced years ago. I can remember the preparations for trips to the beach made it seem like we were going on an expedition.
The North Carolina of the fifties was a very different place than it is today. There were just a few four lane roads, and none of those went anywhere near the beach.

A trip to beach from western North Carolina required careful planning and preparation. There were few if any restaurants east of Raleigh where once a year visitors could count on finding good food. With a trip to the beach taking much of a day from our home turf near Mount Airy, much of the preparation for the trip involved cooking food to be enjoyed along the way.

My mother was an expert at packing picnic lunches. The meals on the trip down to the beach were a highlight of the trip. The meals always had some combination of country ham biscuits, fried chicken, and pimento cheese sandwiches. The only beverages that I can remember were those small bottles of Coca-Cola.

In addition to the food for the trip down, much of the food for the week at the beach was carried down in the car. I can even remember taking jugs of water along with us. It is a good thing we did not need a lot of clothes since there were no giant cars back in the fifties and sixties.

There were also no by-passes in those days, and even gasoline stations were a challenge to find. The trip to the beach was a tour of many small towns and villages.

There were a few things that we watched for to indicate that we were getting closer to our destination.

One was the first Spanish moss and the other was the first sign of the mosquito ditches along the roads. Then we would look for that first long bridge over water. I do not ever remember being bored in spite counting cows being one of the few games, but I am certain we were normal kids anxious to get into the water.

Spending time on the beach and in the water pretty well summed up the activities. We often had a couple of my older cousins with us. They were teenage girls, and I can remember them going to dances and having a lot of fun on the boardwalks.

Meals were not a big deal though I can remember some seafood restaurants. It was really all about the beach and enjoying the water.

Much of the coast shut down after the summer season years ago. That is no longer the case especially along the Crystal Coast. Most of our services are year around since there are plenty of us who spend all of our time here.

Today's holiday visitors often come to the beach to get away from excessive holiday celebrations. The uncrowded fall or winter beach attracts people who are seeking peace and quiet during the holidays.

With four lane roads leading right to the Emerald Isle or Atlantic Beach bridges, travel from anywhere on the east coast to the Crystal Coast is much easier than it was during those early expeditions that our family made.

In looking through the recent local papers, I am amazed at how many restaurants in the area are doing Thanksgiving dinners. There are plenty of choices so that you can come to the beach and enjoy a holiday meal without even cooking.

It is a short trip to a different perspective on your usual holiday celebration.

We recently drove from Charlotte to Emerald Isle. The driving part of the trip only took five hours even though we mostly stayed off of the Interstates until we got to Raleigh.

Along the way there restaurants of every type. There was even no challenge finding gasoline priced below two dollars a gallon.

Even so I sort of miss the picnic we used to take with us.
Posted by Ocracokewaves at 6:32 PM