Never Scrimp on Your Bait Shrimp 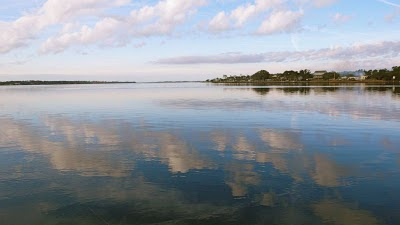 We have faced some cold weather here on the normally warm Crystal Coast. It has made fall fishing a little more challenging. Between the winds, rain, and cold weather, most fishermen have not been out on the water nearly as much as they had planned. Today the weather moderated somewhat, and this afternoon we even saw the temperatures make it back into the sixties which is near where they should be this time of year. With that background, one of my fishing buddies and I decided to try our luck at one of our fishing holes which happens to be just a couple of minutes by boat from my dock. This morning I went out to get shrimp for bait. For some reason I decided to buy really nice medium shrimp. It turned out to be a wise decision.
It only took us a few minutes to load my boat and get underway. My wife's last words to us as we pulled away from the dock were "do not bring any fish back for dinner." While I am sure she meant that as a funny parting comment, I think it turned into a curse.

Since my boat had not been out in a couple of weeks, I wanted to run it down the river at a pretty good clip just to get the motor warmed up. We turned at the red sixteen buoy near Bluewater Cover and headed towards Swansboro with the boat planing nicely.

It only took a couple of buoys for us to figure out that we did not have enough clothing on to make a comfortable run down the river. I slowed the boat down quickly, and we started working our way close to some oyster rocks where we had enjoyed some great success on our last two fishing trips.

We anchored in about nine feet of water with a slope of deeper water near enough for our casts to reach. The tide was just starting to come up in the river. In a short time we both had lines baited with shrimp in the water waiting for our initial bites. The last time we were at the same spot only a couple of weeks earlier, we had on shorts and tee shirts. Today we both were wearing jeans and jackets. The last time we also had gotten bites almost as quickly as our baits hit the water.

Just as we had anchored I had noticed a couple of nice fish on the fish finder so we were hopeful that the fish would be interested in our baits.

Within about five minutes we trying different spots around the boat with no bites of any kind. After about twenty minutes of no interest from the fish, we decided to move to some deeper water.

We pulled up the anchor and moved fifty yards up the river to a spot where the water is twenty feet deep. My theory was that perhaps the fish were holed up in warmer and deeper water. It did not take us very long to decide that the deeper water was not the answer to our problem.

We both switched to artificial lures and flailed the water for another hour while checking our shrimp baited bottom rigs regularly. About an hour and one half into the trip, I picked up my camera and started snapping some pictures of clouds reflected on the water. I figured if I could not catch any fish, I would at least come away with some nice pictures.

Despite our best efforts, we did not get a single bite. Just before five o'clock, we pulled up our anchor and headed back to my dock. It had gotten cool on the water, and with no action, we figured that we would save our efforts for a warmer day.

Still we had a great trip, but what happened to the shrimp? Since we had only used five or six shrimp, and they had been nicely packed in ice for the trip, I took them inside and cleaned them. My wife did her magic with the quick dip that she gives shrimp in boiling water, and we enjoyed a nice shrimp cocktail before dinner.

Now if I had bought bait shrimp, the only creatures getting to enjoy shrimp would have been those neighborhood crabs that live a very good life at the end of my dock.

So rule number one is buy good shrimp, they might be the only thing edible that comes back from your fishing trip.
Posted by Ocracokewaves at 6:30 PM