You Cannot See September from Here 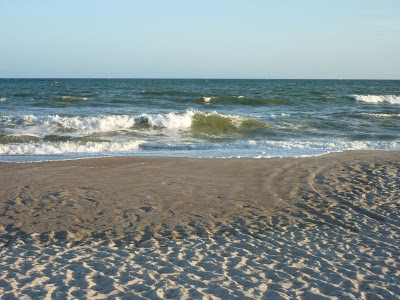 With a little more than a week of August left, it is natural to think that summer is sliding away, and September is just around the corner. Depending on where you hale from, September can be a real harbinger of winter.
The first year we lived in Nova Scotia, we got over a foot of snow in the middle of September. The power was out for a week. Some recent visitors to the island from Montana have told me that they are already seeing temperatures in the high thirties at night.
Last week when I was in the Virginia mountains, I even saw a few leaves changing. In most places September does mean much cooler evenings and a return to normal day time temperatures. Here on the Crystal Coast our average low temperature at night changes very little during September.
Even our daytime highs only start to moderate after the middle of September. Weather is challenging to predict as anyone who has seen this year unfold, but those are the long term trends here on the coast.
September on the Crystal Coast, when it comes to weather, is pretty much a continuation of August. As we walk the beaches there is little thought of cooler weather until we can see October.

Our weather is one of the neat things about living here on the Crystal Coast. Cateret County is over one half water, and those large bodies of water tend to keep our temperatures from changing very rapidly., In the spring we often will go through much of June without serious hot weather because the waters around us have not warmed.

In the fall the warm ocean waters keep us from feeling any chill until well into the fall. I personally like our warmth. After years in Canada, it feels pretty good to wear shorts until December.

As the summer winds down, August is one of the last months where we enjoy a wide selection of local produce, but that is pretty much the case in much of North Carolina. My good friend, Sally, who lives in Massachusetts, has seen a tomato-less summer. It is just the opposite for us. My wife will hardly eat a homegrown tomato because she has seen so many on her plate this year. I might even have to secretly plant my fall tomato crop. When we lived in Canada, September was probably one of the biggest garden months.

One might think that we would see a big September drop in visitors. Fortunately the drop we see is not something for concern. We have this whole set of visitors who have just been patiently waiting for September before they come to the beach. We get a lot of parents whose children are still too young for school. Then we see some older travelers who just like to avoid peak seasons. Sometimes they are on the way to Florida. Finally fall brings us our fishermen who wait all year for this magical time.

It is really very relaxing to have an extra month to transition into fall. It gives us more time to think about the important things in life such as which is the best shelling beach or which restaurant serves the best grouper sandwich.

It is a little easier to get into local restaurants during September, and the grocery stores are no longer out of bounds on the weekend, but from where I sit, September just looks a lot like August with younger kids to me .

I am pretty sure my feet will not be able to tell the difference in water temperature along the shore as September arrives. I am counting on blue skies and fluffy clouds for months to come. There might not be any as interesting as the one I saw this morning, but we will have some wonderful summer days in September before we see October on the horizon.
Posted by Ocracokewaves at 12:49 PM