A World of Foamy Water 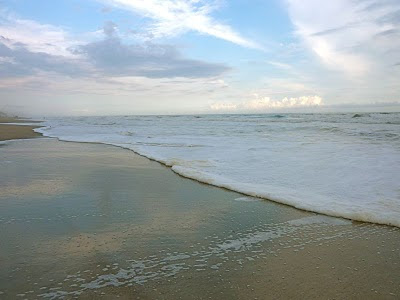 The red flags were flying yesterday on the beach. Hurricane Bill passed us by but managed to mess up the swimming for a few days. While it is a little inconvenient to stay out of the water on a beach vacation, it is a whole lot better than an evacuation.
In the end what we got out of Bill was not worth any complaints. We watched with interest as Bill headed to Halifax, Nova Scotia, where we lived for a couple of years. I got a kick out of the local newspapers covering the arrival of Bill. Maritimers in Canada and the US are noted for their ability to handle almost any situation with complete calm.
One local Nova Scotian was interviewed and asked how he felt about the approaching storm. He said that he was much better prepared than he was for the last storm. He had purchased a manual can opener so he no longer had to worry about the power going out. I think Halifax escaped Bill with lots of rain and some wind. Here on the Crystal Coast, we ended up with a lot of foamy waters.
When we first walked on the beach last evening we could tell immediately that there had been some changes and some high water. The sand was wet almost to the steps of Third Street Beach. Also the small sand bench that is often on the beach had been replaced by a gently sloping beach.

However, the most obvious difference was the water. It had been whipped around so much that in places six inches of foam floated on the waves. I thought it felt neat until a larger than normal wave managed to soak most of my shorts.

Somehow it felt like our favorite beach had been transformed for a time into a beach with waves of foam. The waves seemed to be breaking a little farther from shore than normal which seemed to mean that the water got crashed into the sand multiple times before reaching the shore. Perhaps that action is what created all the foam.

It was also very still on the beach with almost no wind. The firm sand made for really great walking. However, it appears that all of our shells have temporarily been transported to another time zone. There were almost no shells on the beach. If past experience is any guide, they will be back.

Our little piece of favorite beach which is just about as far east as you can get before driving out of the town of Emerald Isle was also one of the few places last evening with any blue sky. Back down the beach towards the town of Emerald Isle the sky was especially dark. We could also see dark clouds across Bogue Sound and storm clouds to the east of us. Only the ocean water to the South seem to lay claim to some blue sky.

It was just another one of those cases where we managed to find some blue sky for our evening out. The calm water made it easy to lose oneself on the beach. We will get to see enough rough surf over the year. It was a treat to walk in the foamy waters of the Atlantic even for one August evening. The nice light and foamy waters caused my camera to go wild, and I ended up posting four pages of photos that I selected out of the three hundred that I took.

Still even a drive in the rain was a small price to pay for a magical evening and a miss by a hurricane.
Posted by Ocracokewaves at 12:48 PM