Waiting For the Winds To Die Down 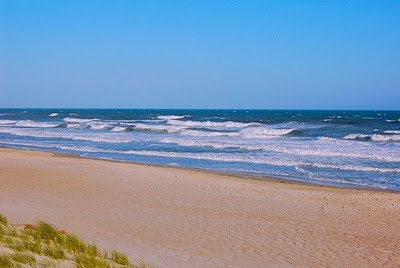 It seems that April and May have more than their share of breezes as the land and the sea try to work into a temperature equilibrium. Lots of wind means those of us fishing from smaller boats end up staying on shore. People visiting the beaches on a windy day can get some minor sand blasting. Areas farther inland will often get seriously warm while we have enough of a breeze to make things very comfortable sometimes even cool. We get some days when it seems like our summer weather pattern is close to being established, and then the winds start blowing again. It becomes a waiting and guessing game. When will the winds finally drop down so we can enjoy the area waters and beaches? It is a question that gets asked each year.
Saturday, May 9, was about as nice a late spring day as you could ask for along the Crystal Coast. The temperatures were in the upper seventies. The sky was blue, and there was not a hint of severe weather during the day.

All was nearly perfect except for the winds which were steady all day long. The winds did not stop us from our yard work. In fact the winds made our chores more pleasant. I even washed our car and truck. Drying them off was easy since the winds did most of the work.

Yet the White Oak River was far too stirred up to venture out in our skiff. The white caps that I could see from my deck also made it clear that kayaking would not be fun. I did notice some people going to the subdivision pool, but I generally like to do my swimming after the weather has settled into the mid eighties for a few days. Years of living in the north have made me a little slow about jumping into the water before June.

Eventually we decided to go over to the beach in spite of the winds. My guess was that it was too windy for many people to be there. I actually was hoping to record some wave sounds for a little movie project that I am doing. Lots of people would spoil my opportunity so I was hoping for an uncrowded and relatively empty beach.

On our way to the beach we made a slight detour and stopped by Clyde Phillip's seafood. I have been craving some home cooked flounder. With no opportunity to fish, I put myself in a corner. Buying a nice one at just a little over two pounds was the only way to get flounder in the pan. After the experts had turned it into four boneless fillets and iced it down, we resumed our beach trip.

On the way over we noticed a sign at Captain Sam's Seafood. They were advertising fresh shrimp. A week ago they were still working on their boat, but it appears they have been out and come back with the first of the 2009 shrimp for the area. That is a positive sign.

Our trip through Emerald Isle confirmed that our weekend visitors are still coming. The Emerald Isle police had a car and a motorcycle pulled over just before Emerald Plantation. The porch of Jordan's was packed with diners waiting to get into the restaurant.

It did not take us long to get to the Eastern Regional Access. I was really surprised to see a pretty good weekend crowd for this time of year. People seemed to be ignoring the wind. There were actually some people in the water up to their knees.

It would not have been my perfect beach day, but I guess if you are visiting, you have to take the weather that you are dealt, and today was sunny and warm in spite of the wind.

After meeting a couple of Siberian huskies coming off the beach with their owners, we headed back home to wait for a better beach day. There was no reason for us not to be picky, the closer beach spots are less than ten minutes from home. Still the trip was not a failure. I did get a few nice pictures including the one at the top of the post.

Our trip back to Bluewater Cove did not take long. Shortly after we got home, I was dropping some flounder into the frying pan. Pan fried flounder is a southern classic which always makes we wonder why the winds will not stop blowing so I can go flounder fishing.

If some of our local experts are to be believed, the winds should stop by the end of May. I am counting on that.
Posted by Ocracokewaves at 8:11 AM