Peace on the Beach 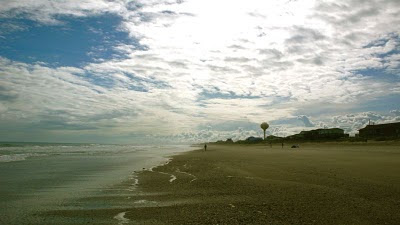 May is a a transition month here on the beach. The waters are warming up, the winds are dying down, and we are beginning to see a trickle of our summer visitors. There is more traffic over on the Island, but not so much that it makes any real difference. The grocery stores are a little more crowded on the weekend, but really this is the quiet before the storm. The beaches are still virtually empty except on the nice warm weekends which seem to draw a fair number of people who come for the day. May is stiil a time when one can find plenty of peace and near isolation on the beaches during the week. It has been a busy week for me. I spent much of the week on real estate work including a movie which is a virtual tour for an upcoming listing. After lunch on Friday, I was ready for some beach time. I was fairly sure that we would have the beach to ourselves.
Around 3 PM we loaded the car for the trip. The gear I put in the car was simple but included my favorite lightweight surf rod and my tiny fishing bucket which has a few lures, a pair of pliers, and a fishing glove. A couple of cameras also made the trip with us.

We rarely sit on the beach since both my wife and I prefer to stroll along the water's edge so we did not bother with chairs. The quick trip through Emerald Isle confirmed that there were a few more people in town but nothing serious to cause worry. It was only a few minutes before we drove by the eastern regional beach access and a few drops of rain started hitting the car. I noticed that there were only a couple of cars at the eastern regional access.

Seeing so few cars there practically guaranteed that we would have Third Street Beach to ourselves. The rain kept sputtering on us as we drove further east, but it never got to the point of being serious. However based on the puddles, there had been some substantial rain just before we arrived.

There were just a few very light sprinkles coming down as we turned into the empty parking lot at the beach access. While the rain was a non event as far as I was concerned, my wife announced that rain meant wet sand which would stick to her feet. I rolled my eyes and handed her the keys to the car. Then I strolled over to the beach.

She headed off for a walk along the shore road. Just as I was walking onto the beach, a young father walked into the parking lot with his three year old daughter. While I proceeded a little east along the beach until I found water that looked right, they set up shop directly down from the access point.

I was actually happy to see them. Watching youngsters experience the pure delight of playing in sand and water, is something that always brings a smile to my face.

I took my camera out of my pocket and snapped a couple pictures to get a feel for the light and scenery. Then I attached a gold Gotcha lure to my line and started flipping the lure into the water just inside the sandbars where the waves were breaking. I actually was not expecting to catch anything. I just wanted to get my feet in the water and do a little casting.

That is exactly what I did. While the little girl played in the water and built sand castles, I focused on working the water in front of me. I did not see any signs of fish, but the ocean water was warm on my bare feet, and the gentle roar of the waves was the only sound that I could hear. My wife even called me on my cell phone, and I did not hear it ring.

I probably fished in the same general area for twenty minutes or so before deciding that the picture I wanted to take for this post was probably a little farther west on the beach. I gathered up my tackle bucket and waded past the little girl and her father. We exchanged some beach chat as I headed to my new position on the beach.

I fished a few more minutes while waiting for a little more of the sky to go from clouds to blue. Then I snapped twenty or thirty pictures so I could have some nice choices for this post.

After the photos, I briefly considered switching lures, but since I had seen no birds feeding or schools of fish, I decided to make a few more casts and call it a day. I noticed my wife had been watching me for a few minutes from the safety of a picnic table surrounded by decking.

It was not long before I made my way up the stairs to the picnic table. My wife asked why I was giving up so easily. I think I mentioned something about being nicely refreshed and headed to the car to load my fishing rod and camera for the trip home. I noticed that the dad and his little girl had been close on my heels when I left the beach. They walked through the parking lot to the rental house across the street.

I was refreshed as I told my wife, but a better description would be cleansed. I had forgotten about some frustrations from the week. My mind had moved on to some new thoughts, mostly about fishing. When we went by Jordan's Restaurant and the Fairway Restaurant, I noticed that the evening crowds were starting to build.

As we drove home, I wondered if there might be time to sneak in a short kayak trip out into the river before dark.

As luck would have it, dinner was a frozen flatbread pizza which quickly cooked in the oven. About ten minutes after seven PM, I slid my kayak into the water and started the short paddle out to the White Oak River. Our inlet was very peaceful, but by the time I got into the White Oak, there were some fairly serious waves for a kayak, dark clouds, and a strong wind coming in from the ocean. I managed to hold my position in our boat channel for fifteen minutes while I hoped for a spectacular sunset.

It was not meant to be. The sun stayed far behind the clouds so I quickly turned and paddled back to our dock. I had not even bothered to make a single cast with my fishing rod which always makes the trip in the kayak. In the space of a few hours, I felt like I had been in three different climate zones, beach, inlet, and river. They were not very far apart in distance, but the beach and inlet were far more pleasant than the river.

As I was putting my gear away for the evening, my thoughts drifted back to the peace that I found on the beach. It was definitely the highlight of my day. The memory looked even better transposed against the waves, wind, and dark clouds that I found on the White Oak.

I am going to hope for a fine beach sunset tomorrow night. I think waiting for that with my feet in the warm salt water might be a good way to end a Saturday. Who knows I might even catch a fish?
Posted by Ocracokewaves at 8:07 AM