The Summer Is Off To a Great Start 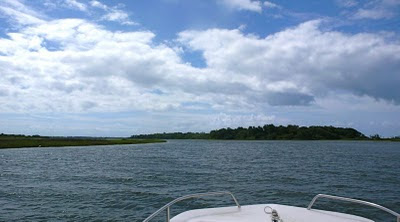 The summer season is here, and as a local waitress said to me in the line for groceries this evening, "Life as we know it has ended for a while." Based on traffic going across the Emerald Isle Bridge this evening, I would say that the tourists have come back to the beach in force. When we drove across the bridge, traffic was slow because of a fender bender that happened just as you come off the bridge onto Emerald Isle. Even then, traffic was moving smoothly. As soon as we got a whiff of some salt air, the group decided to take the pulse of the town and walk the Bogue Inlet Pier. The pier parking lot was as full as I have seen since last fall. It was a great evening for a walk, and we saw lots of activity on the beach and pier. Though we saw some nice Spanish mackerel being cleaned, we did not see any fish pulled in while we were on the pier.
My daughter from Northern Virginia was with us, and this turned out to be her first visit to our famous pier. She is a big fan of our quiet and uncrowded beaches so I was curious to find out what she would think of the pier. She finally turned to me and said it was like being at a very laid back party.

I think she hit the nail on the head. From our perch on the pier we could see young children playing in the shallow water, There were also surfers actually catching a wave once in a while. Then there were a number of young couples enjoying walks on the beach and on the pier.

Some older folks like us were on the pier to watch the spectacular sunset that we got this evening as the sun dropped behind the beach houses. While it was cool on the pier, everyone seemed to be having fun. There were people fishing of every imaginable description. I took great pleasure in pointing out to my wife the large number ladies who actually had fishing poles in their hands. Somehow I doubt that it helped my case that she should get a license in case I get a couple of fish on different rigs.

It took us a while to get back to our truck since my wife had to visit with a dog that had just come off of the beach. Cruising back through Emerald Isle confirmed that we are on our way to what looks to be a very good crowd this weekend.

Jordan's and the Dairy Queen both had good crowds. There was so many cars parked in the Food Lion parking lot that we decided to see if Lowe's might have fewer folks so we could sneak in and pick up four or five things. My wife likes to play grocery store roulette which is my term for visiting a grocery store during summer on a Friday, Saturday, or Sunday.

While there was also a good crowd at Lowe's, we decided to give it a try. It actually was not too bad. The exceptions were the aisle with bottled water and the area near the milk. I am glad that I am on Western Carteret Water and do not need bottled water. It looked like a swarm of locusts had consumed all of the water. The milk and junk foods also looked well shopped.

As we were leaving, I thought the crowds looked to be thinning a little. I said something about it to one of the managers. He said that the crowds had been at full force all day, and that it was good things things were slowing since they were starting to run out of some things.

I think almost all residents are excited to have some company here on the beach. Personally I am really happy to see a very good crowd here this weekend. I hope everyone enjoys their time on the beach, and manages to get home safely.