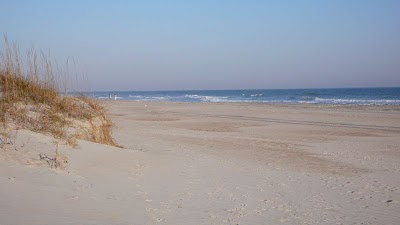 It is hard not to be excited now that our normal weather has returned. Sunday over on the mainland our high temperature was seventy five degrees Fahrenheit. That is within sight of perfect weather which I define as about eighty degrees. I opt for the slightly higher temperature because I like to spend a lot of time either in the water or on the water. Everyone took advantage of the great weekend weather. After we got back from church, I washed both our vehicles. I am happy to report that it was so warm in our driveway that I ended up wearing shorts and a tee-shirt. It was so nice to be back in my normal coastal uniform. I did get a little carried away. We decided to drive over to Emerald Isle and go for a walk on the beach. We got over there just before four PM. I was surprised at what I found.
Most of the people walking on the beach were wearing jackets and long pants. Some people even had the hoods of their jackets up. It only took a few seconds outside the car to understand why. The temperature on the beach was twenty degrees cooler than it was on the mainland. Our car thermometer registered fifty five degrees.

I refused to be defeated and had my wife drop me off at the eastern most Inlet Drive beach access. I hustled out to the beach and took a few pictures before hurrying back to the car.

We headed back to Bluewater Cove where I did a quick bike ride while my wife went for a walk. It had cooled some, but the temperatures were still much warmer than they were over on the beach where I am sure being surrounded by cold water made most of the difference.

Sunday evening I posted some photos from the day including a shot of our window thermometer for anyone doubting my observations of the warmth.

This morning was so nice that I dropped our skiff in the water and took a quick spin out on the river. I often mount one of my cameras on the console of the boat so that I can take pictures of my trip. It you click through the shots quickly, you can almost imagine yourself on a boat ride.

When I came back it was nearly 11 AM and the temperature was already well above sixty degrees. Our home is south facing and has lots of windows on that side so it warms up nicely when the sun has some power. The cat followed me up to my office for my morning writing. It was so warm that I opened the windows, and our cat curled up on the warm windowsill.

Getting back on a normal weather track is going to improve the mental health of everyone in the area. With the surprise snow storm people were beginning to question their memories of previous winters.

I knew if we could just get into February that the Carolina sun would rescue us.

With February the Crystal Coast starts its festival season. We made a quick visit to the Chocolate Festival in Morehead City on Saturday. Based on the attendance there is no doubt in my mind that the ladies like chocolate more than men.

After the festival we decided to visit Beaufort to check out any new visitors to the harbor. There are always some interesting boats tied up. There was one that reminded me of a modernized and larger African Queen. Of course there are always some great Hatteras yachts tied up there. These are my photos from the Beaufort waterfront.

After a car tour of some of our favorite Beaufort neighborhoods, we decided to head home by way of the beach. In Morehead City we crossed the bridge over to Atlantic Beach and headed towards Pine Knoll Shores. The sun was dropping in the sky so we stopped at the Iron Steamer Beach Access so I could take a sunset photo.

Taking sunset photos is always a balance between catching the right amount of light without burning out the photo and letting it get too dark. I estimated that if we hurried I might get another sunset photo slightly farther down the beach.

We made it just in time to the Roosevelt Beach Access in Salter Path. I hurried out the boardwalk and took another couple of pictures which I posted with some photos of live oaks at Carteret Community College in Morehead City.

Saturday, Sunday, and now Monday have been wonderfully warm days, and it looks like the great weather will continue with even warmer temperatures on Tuesday. With temperatures this warm, the strawberries will be ripe in less than two months.

I would love to play hooky on Tuesday, but I know that Wednesday is also supposed to be nice so I guess that I will report for duty without any second thoughts.

Actually many of my thoughts will be out on the water, but that is normal. It will not be long before we are out on the river fishing.

There is nothing as nice as returning home after the fish have been biting. When we have some fish in the cooler as we turn to slide the skiff on my lift, I will be one very happy fisherman.

You can actually follow part of my latest trip on Google's Panoramio which places pictures on an aerial photo or map.
Posted by Ocracokewaves at 11:46 AM