Dreaming of summer days at the beach 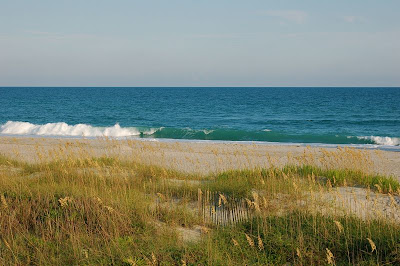 This has been a good day for dreams. Even with the rain, it has been warm enough to kindle some thoughts of summer days. The daffodils blooming in the parking lot of the grocery store this afternoon helped my imagination farther down the path to summer and the beach. Then there was the quiet afternoon nap where it was easy lose myself in a dream world of hot sand, warm waters, and light breezes. I think everyone is ready to see this winter end. If thoughts of summer days on the beach can do the trick, we should all concentrate very hard.
I know my Canadian friends have had enough winter. Last weekend, central New Brunswick, where we lived for eleven years, had what the local newspaper described as an "once in a generation storm." Some areas got close to three feet of snow in what was their eleventh storm of the season. Now this weekend another storm is headed up the coast. A friend who does maple sugaring told me that he has measured over eight feet of snow in the woods.

This storm has been given the name of the I95 storm and will blanket areas of central North Carolina, western Virginia, and northern Virginia that have so far escaped significant snow this season. I hope the snow lovers get what they want, but I also hope the snow quickly disappears so we can get on with spring.

Winter has had its season, we need to focus on the weather needed to allow beach lovers to have their day in the sun. Unfortunately one the first things we need to do is get rid of the northern snowpack so we can forget about snow chilled winds whipping down from the north.

Our waters have cooled so much this winter that when we went over the Cameron-Langston Bridge to Emerald Isle today, the top of the span disappeared in a fog which had formed because the air temperatures in the sixties were so much warmer than the Bogue Sound water temperatures which were likely in the upper forties.

Some weather statistics are in our favor. We normally warm up fairly quickly. As our temperatures hopefully move back to normal after this last gasp of winter, we can feel good that the average daily high here on the Crystal Coast goes from sixty-seven degree Fahrenheit in March to seventy-six degrees Fahrenheit by mid-April when the low temperature approaches fifty degrees.

As surely as there will be some days in August that are almost too hot to be outside, I can also guarantee that by June, this winter will have faded in our memories. Last year, I did my first swim in the ocean on June 3. The water temperature was close to eighty degrees.

We have a long way to go, but I know from experience the Carolina sun always wins the battle with winter. We will be warm sooner rather than later. As these next few days of cool weather hold us in their grip, I will be warmed by memories of great beach days from last year and dreams of even better ones coming this summer.
Posted by Ocracokewaves at 11:36 AM