No Boats in Bogue Sound Today 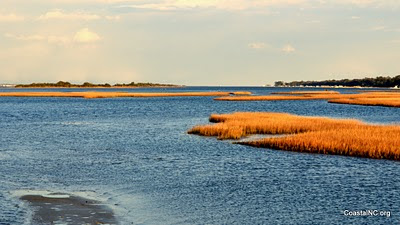 We are a little over a week into the new year.  While the weather has been a little better this first week, we are still not regularly hitting our normal average temperatures for January.  Normally western Carteret County has a January average high of 55F and an average low of 35F.

We had a good start to the month with a couple of days in the mid-sixties followed by another couple of days when we managed to make it over 50F.  However, since Wednesday, January 5, we have not managed to break 50F.

Saturday, January 8, we managed to get to 47F and have some sunshine, but there was a fairly persistent breeze so it felt colder than that.  With the air temperature in the upper forties and the water temperature in the lower forties, the thought of being on the water in a boat was not exactly pleasant.  I was not surprised to see no boats in Bogue Sound when we crossed over the Emerald Isle Bridge. The picture at the top of the post was taken from the bridge Saturday afternoon.

Emerald Isle was also a little bit like a ghost town.  There was a huge difference in traffic between this weekend, and New Year's weekend when we had those warm days in the upper sixties.  Today when I stopped at the beach, there were no people walking on the beach. There were lots of people a week ago when we had temperature twenty degrees warmer.

I guess we have to consider ourselves lucky.  We are part of that shrinking portion of the United States that does not have snow on the ground.  If predictions are correct for the upcoming week, even coastal North Carolina might fall victim to a snowstorm with the potential to bring winter weather from Dallas, Texas to Atlantic Canada. Looking at the Boone, NC forecast this morning, I was not surprised that it looked more wintry than the part of Canada where I lived for sixteen years.

There is nothing you can do about the weather, especially when it has gone haywire.  This year areas as diverse as Great Britain, Florida, California, and even Arizona are joined with most of the US east coast in the common misery of some nasty weather.

Right now I will continue to enjoy the quiet of Raymond's Gut and our feathered winter visitors.  I will let the memories of a much warmer Bogue Sound lull me to sleep. Warmth will make it to the Carolina coast, it always does. Until we get the warmth from the sun, we will just have to settle for what we get from our gas logs in the fireplace.

Just maybe this will be the last serious shot of winter here on the Southern Outer Banks,  we can always hope.

Cold weather is a good time to do some inside work. I even got my real estate websites updated this week.  The cold was not severe enough to stop my afternoon walks.  I only missed one day and that was because we were in Morehead City, but it was cold enough to make me wish for some of that August heat.
Posted by Ocracokewaves at 8:41 PM