Finally a normal winter storm on the NC coast 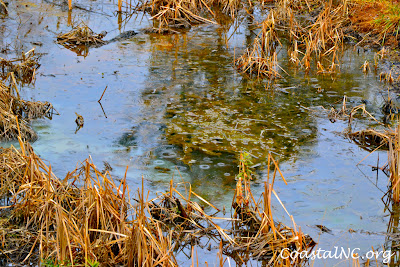 This has been something of a challenging winter so far along the Southern Outer Banks. In an area where the normal high temperature averages about 50F even in the depths of January, even 40F has been a hard to find temperature this winter.

Last year on January 20, 2010, the first significant snow in six years arrived in the area.  A storm with even more snow hit in February.  This year through the first twenty-two days of January, we have already had three snow storms that more than covered the ground.

This last storm on January 22 not only covered the ground but it also stuck to the roads.  Until this storm our high temperatures seemed to be stuck in the low to mid thirties, a near perfect temperature for snow.

Fortunately this next January 25 storm which is sweeping out of the south is staying closer to the coast with the consequence that we are on the warm side of the storm.

Our temperature on Saturday, January 22, hung around 32F all day with the result that we ended up with four inches of snow.  Areas as little as ten to fifteen miles farther inland had no snow and actually experienced a sunny day with blue skies while we were getting whacked with a snow storm that delivered up to seven inches of snow to Emerald Isle and some of the other beaches.

We are facing a different scenario on January 25.  Our daytime temperature is close to 50F.  We are actually going to be even warmer tomorrow with the temperature approaching the upper fifties.

It will be a true winter scenario for areas to the west and north of us.

Until you get to the mountains, the farther from the coast you go tomorrow, the more likely you will find snow in the afternoon.

Rain on the coast during a winter storm is a fairly normal weather pattern for the Southern Outer Banks.  Storms swing across the South, collide with the warmth, moisture, and instability of the air over the Gulf Stream.  A strong storm, most often a Nor'easter forms and depending on its track, some areas can get tremendous amounts of snow while other areas suffer through a mixture of precipitation types along with strong winds and high waves.

We can get hit with wintry Nor'easters or with just wet ones.  This one is forming just far enough away from us that we will just get some rain and maybe wind.  Except for this year, a wintry Nor'easter is an uncommon visitor to our beaches.

Having rain and sending our northern neighbors a wintry mess is a more normal pattern for us, and after our winter so far, it is a welcome return to normalcy.  I hope the folks up north survive this latest onslaught without too many difficulties.
Posted by Ocracokewaves at 1:30 PM

Email ThisBlogThis!Share to TwitterShare to FacebookShare to Pinterest
Labels: Nor'easters