The Joy of Coastal Rivers 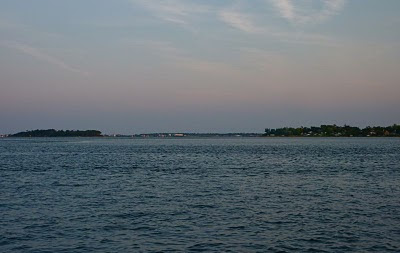 When I grew up in the Piedmont region of North Carolina, the woodland stretching for miles behind our home ended up being my childhood playground. While I really enjoyed playing in the forests, water was always the ultimate attraction. We damned small streams, rode our bikes to farm ponds, and begged to be taken to larger lakes where we could fish from the banks. Our only nearby river was the Yadkin which slides between Surry, Yadkin, and Forsyth Counties. In the early part of the nineteen hundreds my great grandfather even ran a ferry across the Yadkin. The beauty, size, and majesty of our North Carolina coastal rivers makes them hard to compare to interior rivers like the Yadkin. My backyard is now the White Oak River. I can only imagine how wonderful if might have to been to grow up with a huge river behind your home. I know how much fun I have as an adult with a river playground nearly two miles wide.
I often joke that water access is the key to happiness along the Crystal Coast. Great water access is one of the main reasons that my wife and I ended up in Carteret County. My personal goal was to be able to get to the water without leaving my property.

Being on the water is a dream of many fishermen. When we finally found a home on the water in Bluewater Cove, I knew that I would enjoy the waters of the area, but I had no idea how special living on the White Oak would be. A home on the water was just the first step in realizing a life long dream. Now that I have been here almost four years, I like to think having the White Oak River as my neighbor has been a big part of our happiness since moving to the Crystal Coast.

We were not here long before I ended up buying a kayak. That first fall I enjoyed many kayak trips into the White Oak River.

That same fall, I took the Coast Guard Auxiliary Safe Boating Course, and began stalking boating dealerships. By June we had purchased a boat. Having a skiff has been a wonderful learning experience, and it has given me a new appreciation of our coastal rivers.

In the years since we got our kayak and skiff, I have been on the river at daybreak and at dusk. I have caught fish, and more importantly I have taken others fishing, and they have caught fish. Many of those fish have come from the White Oak. Some of my most enjoyable times have been just holding a rod and enjoying the peace quiet of our coastal river.

And there have been a lot of evenings like Friday and Thursday of this week when I have either paddled out to enjoy the sunset or dropped the skiff in the water and idled out to the river to watch the sun disappear.

Of course there have been a lot of fishing days, and most of them like Friiday have been successful. Today I caught a 30" shark on the other side of the Intracoastal at Swansboro. Still the White Oak did not let us down.

We ran back up the river with the tide, and I caught a Red Drum 18 inches long in sight of Silver Creek Plantation. Then after dinner I dropped the skiff in the water and came back out on the river to watch the sun drop out of sight. I even managed a few casts in an attempt to chase down a school of fish that I had also caught sight of the night before.

Living along the river, you learn its moods. I think the White Oak is most beautiful early in the morning. There is sometimes a light fog then, but usually it burns off by ten o'clock. One of my favorite boat trips is this early morning one down the White Oak. I named it Mackerel Morning.

If you think the area's beaches are the only attraction, you are in for a surprise. If you take the time to get to know the White Oak or one of the other rivers, you might just make a friend for life. The White Oak has the added excitement of being tidal. With the tides, the current, the oyster beds, and the winds, there is a lot to learn about the river, but there are plenty of rewards in taking the time to learn the White Oak.

Living on the White Oak has been a dream come true for me. Ten minutes to the beach by car, and twenty minutes by boat to the Intracoastal makes for easy living especially when you have more stars for neighbors than people. While the path down the White Oak is the first part of a journey to some neat spots like Bogue Inlet, it is also my home waters now, and I am having lots of fun learning all the river's secrets.

Here are some recent pictures on the river and near the river's mouth at Swansboro.
Posted by Ocracokewaves at 5:46 AM