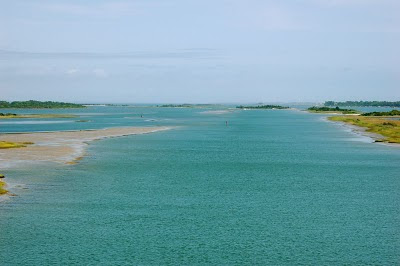 We get lots of people who say that they want to live on or near the water. Since Carteret County is over one half water and no place is very far from the water, you can generally meet that requirement by just becoming a Carteret County resident.
Still it is a big decision as to what water meets your needs. One of the first divisions that pops up is between beach and boat people. While it is easy to love both, usually in the end, one or the other has to give. Usually the only way to have a boat at your home if your home is on the beach is to park it in the driveway.
Our big waters, the ocean, sound, and rivers each have their advantages. It often depends on your personality as to where you will be the happiest. Of course your wallet often has something to say about the location that best fits your budget.
Just about everyone knows that our beachfront property is the most expensive in the area, but that is sometimes tempered by the fact that it also provides the strongest stream of revenue if you are planning on renting your home part of the time.

The oceanfront property also is the highest maintenance property that we have since they are usually the most exposed to weather and especially the winds.

Normally the beach homes you find are a somewhat smaller house if you consider the same amount of dollars will buy more home on the mainland.

When we were weighing whether to live on the beach or not, we found homes that were sixty to seventy percent larger on the mainland which cost the same as beach homes back several rows from the water.

Still there is nothing like being able to walk out your door and be on the beach. It is a rare privilege, and one that many have figured out how to afford.

While it might appear that being on the sound poses less danger, it is still possible to get substantial flooding along the sound. The water in the sound is often the same color as the ocean and usually has a nice sandy bottom. Many people have modified their docks along to the sound so that the flooring can be dumped into the water before a storm. Without flooring, docks can much more easily survive the flooding that might come with a storm.

The least expensive water to own is on a river. Just as the North River is a popular spot over by Beaufort, the White Oak River has a number of communities not far from Emerald Isle.

My wife and I actually live on the White Oak River in Bluewater Cove. We chose the community because it was designed as a boating community with great access to the Intracoastal Waterway. While we have to drive ten minutes to get to a beach, I can have my boat in the water in less than five minutes. Ten minutes later, I am exiting the White Oak River and turning into the Intracoastal Waterway.

With being on the river, we got a little more protection from storms and still found a community close to the beach. While the White Oak is a blackwater river with a bottom that is either silt or oyster shells. It is very clear and clean since there is no city dumping pollution into it. By living on the White Oak, we also have the choice of boating on the river when the sound and Intracoastal are crowded during the summer. Few tourists will venture up the White Oak since it requires following a marked channel.

Finding the right spot on the Crystal Coast is all about trade offs. Once you have seen a few properties, you will know whether the beach, sound, or river make the most sense for you.
Posted by Ocracokewaves at 12:51 PM