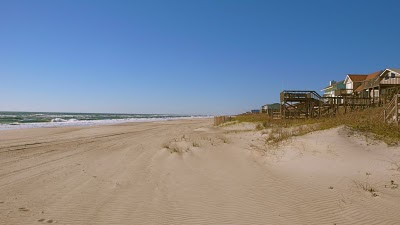 Warm is a relative term, but I think sixty-five degrees in January qualifies as warm. Most people only have pictures in their minds of the beach during the summer when it is populated with people in bathing suits. The nice thing about living on the coast is that you get to see the beach at different times of the year. My favorite time is late fall when the water is still warm and the air has cooled a little. While January at the beach cannot match that, it still has some wonderful qualities that draw me to it sometimes more than I manage to make it over to the beach in mid-July. There is no better place to clear your head than the beach on a warm, sunny day in winter with a light breeze.
The beach is no stranger to natural rhythms. Winter is the time when even the beach slows down. There are fewer fish in the surf which means there are not as many birds around. Humans that are still on the beach have switched from bathing suits to blue jeans.

Our tourists are down to a trickle. The ones visiting now are those who appreciate the peace and quiet of a winter beach. It can be cool or even cold for a while on the beach during this time of year. However this December and January our temperatures have been moderate, often reaching into the sixties. We even hit seventy-five on December 19.

With the beach only being a drive of ten minutes from our home, it does not take a lot of planning for a beach walk. This time of year the prime time for walking is from about 1 PM to 3 PM. After that the temperatures start to cool a little.

I will often show up later than that hoping to catch a nice sunset, but by sunset most of the heat of the day has disappeared. The only people staying on the beach will be a few fishermen and crazy photographers like me.

While many areas are stuck with cold gray skies, we are lucky on the Crystal Coast to have beautiful blue skies during much of the winter. This last week I have seen waves with wonderful colors more like what we see in summer than winter. This is one of my favorite wave pictures from this winter.

Great sunsets have been absent for about a week so last week I ended up collecting several beach and wave pictures .

While doing that, I have seen plenty of people taking advantage of the near solitude of our winter beaches.

I can still remember when I worked in the Washington, DC area. My least favorite time of the year to go back to work was January after the holidays. Somehow the city seemed colder then, and people quickly forgot that they had just been on vacation.

A good tradition to start would be a nice week at the beach after the holidays. It would be a great way to recover from the holidays. You could ease into some exercise with a few walks on the beach. The quiet of the beach would make it easy to set priorities for the next year.

Eating some fresh fish after all the rich holiday foods would be a nice way to start eating healthier. Above all if you live in the north, a few days away from the ice and snow always help to make the winter shorter.

This next week looks like a great one to be here. While we might have some precipitation, you can rest assured that it will be rain and not snow or ice. Also the temperatures are going to be in the sixties during the day except for Thursday. That is a nice way to start off the new year.

If you visit in the winter, you might end up almost as mellow as those of us who live here on the Crystal Coast.
Posted by Ocracokewaves at 1:41 PM