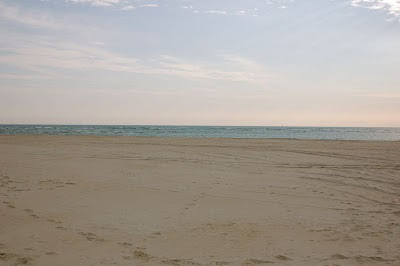 This has been an unusual winter on the Crystal Coast. I stopped by the local visitor's center the other day. The lady in charge of the office mentioned to me that the weather was a little strange for our area. With a little encouragement, she told me that she had been living in the area for over twenty years. In her mind this winter is a strange one with temperatures not often seen here. We have certainly endured some cooler weather than the two previous winters that I have spent on the coast. However, I have to shake myself a little to make sure I put all of this in perspective. Today was what was what would have been a very cool day in the previous two winters. I think the temperature touched fifty degrees Fahrenheit. Yet there I was in our driveway this morning washing the salt and sand off of our car. It is hard to complain very much if you can painlessly wash your car in your driveway in January. Still the cloudy weather if not the cooler temperature has started to give me fits.
One of the reasons is that I have bragged about all the great winter weather we had during the last two winters. Some of my friends have pointed out the error of my ways. We had lunch today with two of those friends who moved down from Pennsylvania a little over a year ago.

This is their second winter on the coast. Last winter was great, but this winter has been more of a challenge. I was getting beat up pretty badly on the way to lunch when I decided that they had lost their perspective. I reminded them that as we were wandering down to Morehead City for lunch wearing tennis shoes and some of us without even coats, the state of Pennsylvania was getting whacked with snow and ice.

One of my friends finally admitted that his mother back in Pennsylvania had not been able to go out to breakfast for several days because of the snow. She is not the only one dealing with bad weather.

We heard tonight that our grown kids in Northern Virginia were waiting for the snow to stop before they started shoveling. Some friends from Oklahoma emailed us last night that they were in the midst of a terrible ice storm. This evening I checked the snow forecast maps, and my friends in Maine and New Brunswick will wake up Thursday morning with an additional twelve to sixteen inches of snow. I have had to stop communicating with friends in Boston which has already passed its annual snowfall average before even getting out of the month of January. This latest storm may put some of them over the edge.

All of this made me feel somewhat better, but what really made me feel back on top of the world was the sun coming out this afternoon just as we finished lunch. I had a walk-through inspection with a client who is closing on a home, but as soon as I was finished with that we headed to the beach.

Just crossing the bridge to Emerald Isle with the sun shining and the water gleaming helped immensely.

Still I wanted a spot where I could take a picture of the blue water and skies. Today was by no means one of those brilliant clear sky days that we often have, so we ended up chasing the blue sky. We finally caught up with it over at the Point on Emerald Isle. There looking south I took the photograph of the blue sky and water in this post.

I suspect that picture will keep me going until tomorrow when the temperatures are supposed to be in the upper sixties, perhaps even approaching seventy. While some showers are in the forecast, warm temperatures like that will certainly change my mood. It might even get my boat in the water.

Now all we have to do is get the warm temperatures together with the blue skies and things will be back to normal.
Posted by Ocracokewaves at 11:51 AM