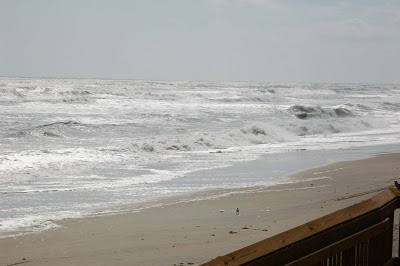 Tropical storm Hanna was the second storm we have seen from our spot on the Crystal Coast. We were fortunate with Hanna since we got some rain which was needed and gusts of wind which did very little damage. It was interesting to note that parts of Nova Scotia got more rain than Carteret County. Storms are amazingly complex. They are part of living on the coast and can cause serious damage, but they also bring welcome moisture and sometimes flood areas that need to be flooded in order for established vegetation to thrive. We spent a lot of time listening to people who had been through many more storms than us as we prepared for Hanna.
We are lucky these days to have technology which closely monitors tropical storm movements. While they are not perfect, we certainly know well before landfall that we need to be prepared.

The week before Hanna arrived, most of us on the coast paid close attention to the various predictions. It was early in the week when I first heard that Hanna might come ashore at the North Carolina-South Carolina border.

While there were some scenarios presented later in the week that had Hanna coming ashore in Onslow County, it turned out that the predictions from earlier were right on target as Hanna came ashore in the early morning hours of Saturday, September 6.

We had gone to bed well prepared. Earlier in the week, we bought three gallons of water for each of us. We also got some new electric lanterns in case the power went out. Finally we had picked up a few extra canned goods. As it turned out, we did not need any of the supplies, but we will keep them as additions to our permanent hurricane preparedness kit which already included a first aid kit and our important papers.

During the early morning hours of Saturday as Hanna came ashore, both wind and rain became part of the background noise of the nigth, but what we heard from the storm was not nearly as impressive as a couple of thunderstorms that had awakened us during the summer months.

When I woke up Saturday morning, I could smell the coffee brewing so I guessed we had gotten through the storm with almost no effects. After resting my eyes for a few more minutes, I noticed that the power had gone off.

After I got up, I was pleased to find that the coffee was still hot. Soon after enjoying that first hot cup of coffee, I went outside to check for damage and take a few pictures. What I found besides gusty wind was some high water that had reached levels similar to what we had seen in a Nor'easteer last winter.

Our yard had some minor debris from neighboring Pine trees but that seemed to be the extent of the damage. After recording the event in pictures that I could share with my geographically dispersed friends, I headed back inside. I was not surprised to find the power back on considering we have buried power lines in our subdivision and the utility company installed some amazing power poles last winter.

All in all Hanna was a good practice event that let us get our emergency gear together and also let us test procedures.

Should we ever get a serious storm, I think we will be ready.
Posted by Ocracokewaves at 8:17 PM