Sometimes the Best Days Are a Suprise 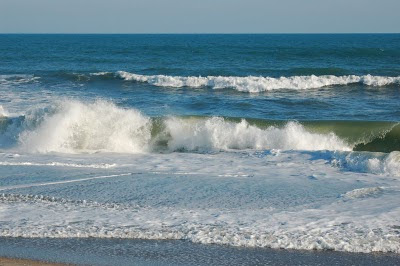 Most of this last week of Septermber 2008, we have listed to weather reports of a storm forming off our coast. First there were reports that the storm had tropical characteristics and might be a really bad nor'easter. While no one seemed to panic, people did keep a watchful eye on the storm. At the middle of the week we even drove over to Bogue Inlet Pier to see if there were any exceptional waves. We did not find any great waves, but I did learn that the Bluefish were showing up regularly at the pier. Finally Wednesday night we heard that the rain would soon be upon us within hours. That night we got some wind and showers but nothing very exciting. Thursday morning I woke up to more showers, but the rain gauge only showed one quarter of an inch of rain.
Thursday initially looked like not such a bad day. The wind was blowing pretty hard, but there was almost no rain for most of the day. I was surprised that Carteret County and many other counties canceled or delayed school on what seemed like a pretty normal but windy day on the coast.

Then about four pm, the skies opened up and buckets of rain descended upon us. By the time I got home a little after five pm my rain gauge was already showing an additional inch of rain. The rain continued to pour down during dinner. Just after dark, I checked the gauge and we had surpassed two inches of rain.

By that time we were nearing high tide and the water was approaching the bottom of my boat which was on our lift. The extra high water had come as a surprise to me. Since the winds had died down, I put the plug in my boat, checked the lines, and decided it could float a little above the lift if necessary.

Once the tide started going down around 10 pm, I came out and pulled the drain plug on boat just in case we had another downpour before morning.

Friday morning was partly cloudy and windy, but the weathermen were promising stellar weather for the weekend. After a week without our standard blue sky I was beginning to need some beach time to catch some rays, so I remained hopeful that the weathermen might be right.

We actually got a shower during Friday night, but when we woke on Saturday morning the sky was the beautiful Carolina blue that we often see at the coast. The weathermen apparently were on target. The storm was gone and had pulled in some great weather.

Before we headed out for the day we talked to friends in Mount Airy, NC and Roanoke, VA. Both areas were cool and rainy while we were approaching 82 degrees Fahrenheit by lunch. Enjoying that summer which extends into the fall is one of the things we do best down here on the coast.

When we finally got to the beach, we were surprised by the number of people who had also come out to enjoy what had become a stellar late September summer day.

After enjoying the beach, we headed back to our subdivision, Bluewater Cove, to enjoy an evening, outdoor birthday party for one of our neighbors. The evening weather could not have been nicer. It was a warm evening under a beautiful canopy of stars.

On Monday I would have never guessed that we would go through all sorts of cloudy, windy, and rainy weather only to get to an amazingly beautiful Saturday.

The nice thing about today is that it put me in the mood for another great day. Fortunately having a beautiful day on the Crystal Coast this time of year happens regularly. In fact Sunday, Monday, and Tuesday look great.
Posted by Ocracokewaves at 6:58 PM