Perhaps A Great October Day At The Beach On Tap 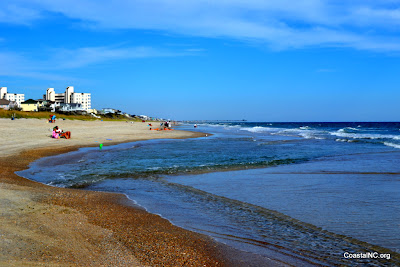 I would have to say that the weather forecast for this coming Wednesday looks great. While my Latin is a little rusty, I believe it would be a great day to "Carpe Litus" or seize the beach.  To see the weather folks calling for a high of 81F and a low of 70F with partly cloudy skies on October 27 is something that should excite us all.

While we have enjoyed a mild fall, and the predictions are for a mild winter, an eighty degree beach day at the end of October calls for some sort of celebration or at least a long walk on the beach.

In fact I am organizing my week around trying to enjoy some of that warmth on this coming Wednesday.  We recently made a trip to the Virginia mountains.   I left the coast in my usual uniform of shorts, tee shirt, and sandals.  We were fine all through North Carolina, but I knew that we were in a different world when I got out to put gas in the car in Martinsville, Va.  The temperature had dropped to fifty four degrees.

The next morning I was running around turning on the furnace, and before we went out on some errands, I had changed to blue jeans, long sleeved tee shirt, and sneakers.  Two days later the morning temperature had dropped to 35F, and I was wearing a sweat shirt.

With that fresh in my memory, I plan to soak up all the warmth that I can in the remaining days of October. On Monday, October 17, we had a great walk on the beach in early afternoon.  There were plenty of people out there enjoying the late fall warmth.  I am hoping for as good or better day on October 27.

Later in the week of October 17, it was warm enough for a boat ride in shorts and tee shirt.  With the water still holding close to seventy degrees, we can hope for an extended warm period that might ease our transition into the winter months.

We never know what winter is going to bring or any other season for that matter.  However, what we know is that the Coast is warmer than the Mountains and Piedmont in the winter. The South is also almost certainly warmer than the North during the winter, though last winter was pretty close.

As they say the devil is in the details.  I have yet to have need of a down coat here on the coast.  My winter shoes are tennis shoes, and I only keep gloves in the car for our frequent trips back to the Virginia Mountains.  There are no snow shovels on our coastal property.

We have seen some ice on the "Gut" which run out to the White Oak. That water behind the house get a skim of ice a few times each winter.  Usually it melts by nine AM, but we did have one stretch last winter where the ice held on in places for a few days.  There were rumors of an unusually cold winter back in the late eighties when the river froze over, but I never saw any pictures to confirm it.

I do know that I shoveled a lot of snow in Virginia last winter, and I have yet to shovel any snow in North Carolina.  We did miss the brief snow storm last winter on the coast, but I was told the snow melted off the driveways before anyone had time to consider shoveling it.  That was a stark contrast to the situation of our friends who live near Pulaski, Va. and had snow on their long country driveway for over six weeks.

I will take that eighty degree weather on Wednesday, enjoy it, and use the memories of it to fend off those first cool days of the coastal winter.  I am hoping that the long range forecasts are correct, and that most of this winter's snows will be from New Jersey to the north.  At least they have the equipment to handle it.

We are much better equipped to handle visitors on the beach than we are to take care of snow on the beach.

Let us hope any snow we see this year on the beach is just a dusting.

Posted by Ocracokewaves at 7:51 PM