Snow on the Crystal Coast 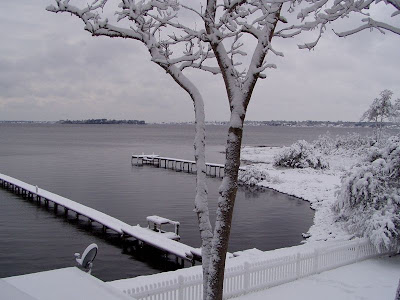 I am in the minority, but I consider snow to be a four letter word when it visits southern beaches. That being said, I have to report that the majority of our beach residents thought our brief interlude with snow was fun and a nice diversion. We were certainly in good company since all forty nine of the mainland states had some snow at the same time. I heard various figures in seventy-five percent range for the amount of the continental United States covered with snow. With such impressive snow coverage, I was pleased that the snow on my personal driveway started melting almost as quickly as it fell. While it was good to see a driveway with no snow, In truth there is nothing more beautiful than a snow covered landscape as long as you can watch from the inside while drinking hot chocolate.
Most of the areas receiving snow this winter are not as lucky as the Crystal Coast. I was recently visiting some friends in Pulaski County, Virginia. Their home is about twenty three miles north of the intersection of Interstates 81 and 77. My friends have lived in the same spot for over twenty years. This year for the first time, they have seen snow covering the ground for almost two months. That would not be a very big deal except they live over one half mile off the main road. This picture gives you a good idea of a driveway that has not melted since before Christmas.

In talking to some Canadian and New England friends, I have found out that they have been enjoying a mild, "open" winter. An open winter is one with almost no snow. They can be a bad thing when severe cold still comes and freezes underground pipes having no snowy insulation, but that is not the case this year. The Canadians have seen relatively mild temperatures and the frost has not been driven deep into the ground.

Anyone on the east coast will tell you that we have not been enjoying a mild winter. Many of our visitors who hail from the Washington, DC area can attest to the fact that they have just set a record for the most snow in one winter. That is an impressive feat since their records go back well into the eighteen hundreds. Pictures of the Northern Virginia and DC winter bring back memories of Canada where I saw over twenty feet of snow in some winters.

While the Crystal Coast has seen warming temperatures in the fifties, many areas in the Virginia and North Carolina mountains have stubbornly refused to get out of the low thirties. As consequence of these cold temperatures, there has been very little snow melt in the mountains.

As we are approaching March, I have high hopes for some sixties, but the long range forecasts are for continued cold. While the snow at the Crystal Coast did not last long, there is plenty of it just a few hours west and north of the coast. I have just finished a trip to our home in Roanoke, Virginia. Recent storms had blocked the mouth of our driveway with over four feet of snow. There were even drifts of two feet up against our garage doors.

While I had to get some mechanical help to deal with the mouth of the driveway I still spent the better part of two days shoveling snow. The snow was what we used to call igloo snow. The only way to deal with it was to cut it in blocks and then shovel the heavy blocks.

Compared to igloo snow, the self melting snow of the Crystal Coast sounds pretty good. Those temperatures in the fifties are about as warm as one can find these days. While the quick snow that visited the Crystal Coast was fun, it was not without its inconvenience. I even saw that a marathon race scheduled in Myrtle Beach was canceled because of snow.

With snow making an appearance in all the states, I think we are definitely approaching a time when we might find near unanimous support for an early warm spring. That is certainly at the top of my list of things I hope to see in March. One thing I do not want to see is more snow.

I did get lots of snow pictures sent to me. I have two batches online. One covers the whole snowy Crystal Coast and the other is just pictures of a snowy Beaufort.

I would like to thank everyone for contributing pictures including the main picture for the post which was taken looking from Breezy Point into the White Oak River.
Posted by Ocracokewaves at 7:51 PM