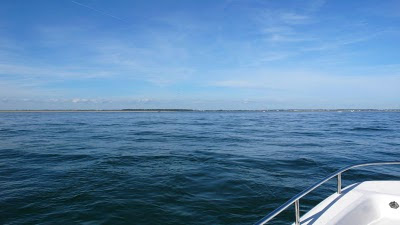 Even a land of beautiful beaches and blue skies has to have a run of less than stellar weather once in a while. That has been the case here on the Crystal Coast for the last couple of weeks. November weather has been warm so we have enjoyed a few remarkable days on the beach and on the water, but the clouds, rain, and winds have mostly kept us at the dock.
The November warmth reminds me that some of our fishing trips this fall have been spectacular. I had no idea I would enjoy a boat so much in the fall. Yet it has been several days since I have been out in the ocean with the boat, and I really miss seeing the open water and the beaches in the distance. From seeing the stirred up water at the Point yesterday,
I suspect it is a good thing that I have stayed at the dock. However, I do know that I missed a couple of stellar water days between the last two storms. Work sometimes gets in the way. With our recent weather, it is a good time to reflect on the Crystal Coast, its seasons and weather.
While this has been a wonderful fall as far as temperature goes, we have had some recent rain that has been unusual in its intensity.

In just a couple of rainy days in November, one from Ida, the hurricane turned nor'easter, and another from a thunderstorm that came up the White Oak one evening, I have recorded over seventeen inches of rain at our place in Bluewater Cove.

Fortunately that much rain really does not bother our subdivision or the homes in it. A culvert washed out on one of the state roads, and they quickly have replaced it with an even larger one. Even with the high tides, the White Oak did not get up over our dock, so I can take some comfort in knowing that torrential downpours are not much of a threat.

These rains have been unusual in a year of mostly nice weather.

We had some really gorgeous weather this spring, summer, and fall. We hardly watered our yard which considering four storms including the recent ones delivered over thirty inches of rain is no surprise. It was a great gardening season with timely deluges. We had tomatoes from the first week of June until late August, and now we are seeing a handful of fall tomatoes.

Fishing was a lot of fun this summer and fall season. We caught more fish than we did in our first two seasons here. With this year's experience, I am looking forward to catching even more next year. In 2009, the river, the sound, the inlet, and the ocean became real refuges for me. They were places where I could completely escape the business of the day, and I managed to really enjoy those days that I could get out on the water.

These recent storms have not dampened my love for the area. In a funny way they have reaffirmed our decision to move to this area. We are unlikely to get much more than a foot of rain in one day. So I have already seen that much, and we have lived to tell the tale. The rain did not harm us, so we can feel fairly confident about where we live.

Some places were not as lucky. The combination of high tides and torrential rains over the two storms flooded a number of areas off Coast Guard Road in Emerald Isle. While the flood water has been just an inconvenience, it is one that most of us would rather avoid. Emerald Isle continues to work on permanent solutions, but sometimes Mother Nature can throw more at you than is possible to handle in a short time.

The good news for Emerald Isle is that the beaches seem to have escaped Ida unscathed. While the Northern Outer Banks, Virginia, and areas further north had terrible beach erosion, Emerald Isle missed that punch. A number of homes were lost in Nags Head, Duck, and on Hatteras Island. Compared to losing homes, some minor flooding just is not a huge worry.

It is fair to summarize this year by saying we have been blessed with good weather with the exception of some minor flooding from rains. Our tourist season has been a successful one. While the real estate market has not recovered, many homes, including some of my favorites, have sold recently.

At last report I think the shrimp season was a reasonable one, and as recreational fishermen we caught some fish, played in the waves, and walked on the beaches when we were not out on the water. With that I have few complaints.

It has been a year of surprises. Earlier in the year, we even saw a dusting of snow which is about as much as I want to see.

It was the first snow in six years here on the Southern Outer Banks. Between the cold of the snow and the torrential rains that we have seen in November, a lot of us have enjoyed what this beautiful area has to offer. We have savored as much of the daylight as our bodies could take. The beauty of the area has been good for our souls.

Looking back there is lots to be thankful for as we go into this Thanksgiving week. There is no doubt in my mind that I am thankful to be living where I am living. I have found many really good friends here on the Crystal Coast.

I am happy the salt water has really gotten into my blood, and I will look forward to my next trip to Bogue Inlet. I hope I can do it before winter comes.

Beyond that, those cool runs during the winter when I take my skiff down the White Oak to keep my motor in shape will have to hold me until spring.

Happy Thanksgiving to everyone.

Posted by Ocracokewaves at 12:57 PM