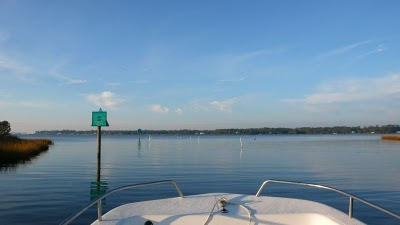 Living on the Crystal Coast can be a life style change that renews your connection with both the natural world and people around you. Moving here can change your life dramatically. For me coming here has been a dream come true and an opportunity to remove the pressures of the corporate world while still having the opportunity to stay active and even busy. Like many people in today's modern economy, I spent far too much time in airplanes both in the air and on the runway. For years, I flew back and forth to California. I used to joke that I really did not care what airport I got to as long as I was less than a three hour drive from Roanoke, Virginia where we lived. In the winter I tried to make sure my cross country flights started in Pittsburgh with their heated runways or Charlotte with their almost snow free airport. I am proud to say that I have not been on an airport runway since November 2003. However, I do have a runway that I use sometimes two to three times a week.
My runway is the marked channel to the White Oak River that you see in the blog picture. It is my launch point for fishing, boating, and kayaking trips. This morning I was out there checking the river at 8:30 AM. I wanted to see if it was going to be a good fishing day.

Though it was stunningly beautiful when I went out, there was a strong breeze from the north once I got to the middle of the river. Winds that early in the morning made me think that we were likely to see deteriorating weather as the day moved forward. That turned out to be correct. We went from beautiful blue skies and a warm sun to heavy clouds, cooler temperatures, and no sunshine.

Fall weather is always something of a guessing game. It was only a week ago that we spent one of the best days ever on the water. The weather was spectacular and the fishing was just as good as the weather.

That runway into the White Oak River takes me from White Heron Lane in Bluewater Cove eventually to Swansboro, the Intracoastal Waterway, Bogue Inlet, and the Atlantic Ocean. There can be adventures all along the way. On a quiet morning like we had last week, the trip out to the Inlet can be one of the most pleasurable rides on the water.

There can also be excitement coming back. It there is a storm bearing down on the White Oak , the ride back up the river can be exhilarating as you skim the wave tops while racing the thunderstorm back to the dock.

I would rather try to outrace a thunderstorm in our skiff than ride a puddle hopper down between thunderclouds only to be diverted to another airport. The transition from a corporate traveler to the pilot of a small skiff is a really nice proposition.

Many times I would hurry off to the airport only to get there and face a wait of hours in a room of people who would hardly look at each other. The nice thing about having my skiff on a boat lift behind the house is that I look out the back door to see if is raining. Then I check the computer for the tides and local radar. If I see nothing on the radar and it is not raining, I lower the skiff into the water, and I am off to the runway.

Last Friday, I had picked up ice and shrimp for a planned fishing trip. As my friend showed up at 12:30 PM, a few rain drops started falling. We walked inside to check the radar and sure enough, a surprise storm had formed off the coast and was moving through Bogue Inlet and up the White Oak. We had a nice chat while the rain was falling. He took the ice home and stuck it in the freezer. I cleaned the shrimp, and we ate them in shrimp and grits for dinner that night. Our chat in rain was a lot more fun than reading a magazine at the gate in an airport.

Moving to the Crystal Coast is a chance to be part of a community that loves the water and enjoys being outside. While we sometimes might get a little tired waiting for the wind to die down, it is still not like missing your plane on a Friday trip home.

This is a world where the tides, the winds, the sky, and the sunshine often define the schedule of events. Most people figure out how to have their lives flexible enough to enjoy some of the special times that we often find here on the coast.

The next time you are stuck in an airport, remember that on our runway we only slow down for bottle nosed dolphins and schools of fish.

If you want to try our runway on for size, there are two new homes available in Bluewater Cove. Call us to arrange a visit, the only interview you might have would be with the resident white herons.
Posted by Ocracokewaves at 8:29 PM