Back on the Bridge 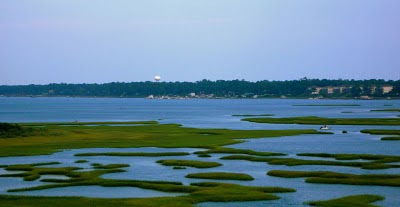 Not a lot of year around residents here on the Crystal Coast are like me and hope to get caught in traffic on the bridge. Yesterday was one of those days when the dream ended up being reality. We showed property all day and headed over to Emerald Isle to drop a package off at another real estate office. It was just before five PM, and I could see the traffic as we were turning from McLean Blvd. onto the bridge approach. I was a little worried, it seemed to be moving a little fast. Luck was with me, and just after we got past the highest point of the Cameron-Langston Bridge, the traffic slowed to a stop. I was ready with a camera and over the next two or three minutes managed to snap a number of shots. My wife prefers this method of bridge photography to my other method which is asking her to act as a traffic lookout and warn me of approaching traffic.
I am just like many people I absolutely love the view from the bridge. It is both a soothing and inspiring view. As I look across the water from the heights of the bridge, I do let my mind soar over Bogue Sound and examine the limitless possibilities of life.

There is something special about crossing the bridge from the mainland to the island. Without being told everyone knows that they are entering a special world. For most of us it is a place were the amount of time we spend is limited but very special.

While most people get to cross the bridge only a few times, there are those of us who cross it at least a couple of times each day. We get to see it in changing seasons, with lots of traffic and with almost no traffic.

One cold winter day I slowed to snap a picture of a beautiful sunset. When I got home, I found that I had captured not only the sunset but also two deer standing in the water's edge on the Intracoastal Waterway.

I have yet to spend more than ten minutes getting across the bridge. I have heard of it taking people one half hour, but those are unconfirmed reports. My way of looking at the bridge is that it suspends you in mid-air over one of the most beautiful scenes along the North Carolina coast. Why would you want to speed through such beautiful scenery?

It is far better to be caught in traffic and to get to savor the fantastic view.

I suspect none of these arguments carry much weight with either tourists or locals. Many visitors have been in their cars for hours and the last thing that they need is to sit in traffic. On the other hand, often locals are just trying to accomplish some normal tasks when they get stuck on the bridge. If you are just running over for a quick errand, taking twenty five minutes for a bridge trip can be very frustrating.

I am not going to try to convert everyone to my view of bridge traffic, but I would ask you to pay careful attention if you visit in the winter months. If there is a car stopped at the top taking pictures, it just might be me, so slow down and be patient.

For another perspective on the meaning of crossing the bridge check out my Sea Salt Blog where I argue that the bridge is a metaphor for a move.

Speaking of moving, we have a new home under construction in Bluewater Cove. It is actually exciting to see some new homes being built.

It just reaffirms my belief that the Crystal Coast is a great place to visit and to live.
Posted by Ocracokewaves at 8:35 AM