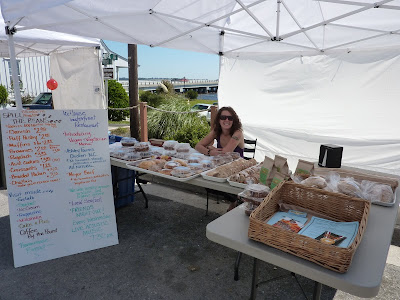 We live in Carteret County, but we definitely consider Swansboro part of our home turf.  I always think of it as a more down to earth Beaufort.  Swansboro has some homes from the 1700s, but it is also a place where real people live.  It is a living and breathing city that has few pretensions, but lots of friendly people.

Some years I have worked in a booth at the Mullet Festival, but this year our company decided to pass so I was free to wander the streets and booths.  I am not a big buyer of crafts and fair items, but I love to look and take pictures.  My wife loves to wander through the booths.  Since there is plenty of football later in the year, I was content to let her have all the time she wanted at the festival.

Eventually it warmed up so much in the sun that she was ready to head back to the car and home.  We were lucky because one of people who attend our church let us park in their driveway so we would not have to walk so far.

Everyone seemed to be enjoying themselves, especially those eating the featured Mullet dinners.  I enjoyed the antique cars as much as anything.    I was especially pleased to see that Spill the Beans is also a bakery in addition to being a place for coffee.  They are located in the same building as the Ice House Restaurant which is down by the water just off Front Street.

For some reason our booths always seemed to be either by the bandstand where we had a hard time understanding anyone asking us a question or in one of the few areas of Swansboro which do not get a breeze.  If we had gotten a booth like the one Spill the Beans had with a view of the water and a breeze right off the water, I might have been a more willing volunteer for booth duty.

I have posted lots more pictures of the 2010 Swansboro Mullet Festival at my Picasa Web Albums site.

On our way home we stopped at Winberry's for some sweet potatoes, but we ended up taking a watermelon home instead.
Posted by Ocracokewaves at 8:05 PM