The Other End of the Beach 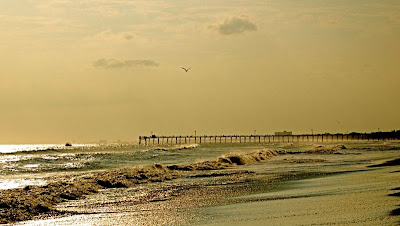 It is natural that I write a lot about the beaches of Emerald Isle. It only takes me ten minutes to get to them so I spend much more time walking Emerald Isle beaches than I do walking beaches at the other end of the shore. Still variety is the spice of life so I do get the itch to walk some different sand. This past Sunday was one of those days.
It was too nice a day to spend inside, but the White Oak was a little choppy so I ruled out kayaking or taking the boat out. We needed a few things from Morehead City so I suggested we hit the Atlantic City beaches before doing our grocery shopping. My wife was agreeable since Fort Macon is one of her favorite spots. It turned out that we never made it as far as Fort Macon.
As we came across the Atlantic Beach high rise bridge, I was amazed at how few people were on the causeway compared to just a few weeks ago. I guess some of the tourists are back home now, but there seem to be a fair number of people wandering the beaches.

When we got to the stoplight at the end of the causeway we turned left and headed towards Fort Macon. Just on a lark I turned onto Henderson Avenue to see if there was a parking space at the small CAMA lot in front of the Oasis Condos.

The location is one of my favorites. There is no dune to walk across and the sand is usually very nice.

We were in luck, there was one space left so we grabbed it, parked the car, and headed out on the beach. It was such a pleasant day that lots of people were strolling on the beach.

The sun was very bright, the water very blue, and the temperature for walking just right. We had a great time and almost lost track of time.

We had spent so much time walking that we really did not have time to go to Fort Macon before sunset. That was actualy okay since I got just the right amount of warm saltwater on my toes during our nice long walk.

I did not see anyone catch anything of size, but it is nice to know that people are still holding out hope for a geat fishing season.

Before we headed home, we took advantage of some of Morehead City's shopping and one of its many restaurants.

Even with our long beach walk and some triple coupons at Harris Teeter, we managed to get home by 8:30 PM.

Sunday was just another example of Savoring our Southern Fall.
Posted by Ocracokewaves at 12:32 PM