The Gateway To Fun 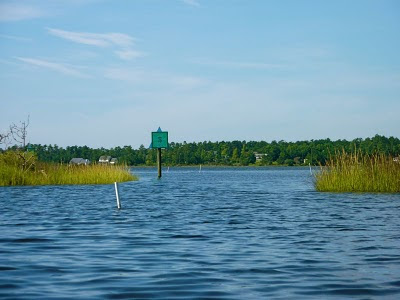 We all have places we go to have fun. There are usually points along the way that signal that the fun is about to begin. For me one of those places that triggers the feeling that the fun is about to start is the narrow passage from Raymond's Gut to the White Oak River. With just a few strokes of the paddle, you go from the safe harbor at Bluewater Cove to the huge expanse of the White Oak River. The river looks very different sitting a few inches off the water in a kayak than it does from behind the center console in our skiff. The Friday before Labor Day weekend, I went out a couple of times in the skiff. On Saturday morning I paddled my kayak out in the river to fish for red drum at high tide. The experiences were completely different, but both were fun in their own way.
I have been itching to get back on the water. Weather and some busy days at work have conspired to keep me on shore. Monday of this past week, I vowed that I would find a way. On Wednesday I consulted with Brian, one of my fishing buddies. Our considered opinion was that based on schedules and forecasts, Friday was our best bet.

Thursday night we talked, and it looked like a front might be hanging just off the coast on Friday. I also got a call from another friend, Dean, who fishes with me a lot. I had been with him earlier in the summer when he bought his wife a new fishing rod. We both had been hoping to get her out in the boat so she could test her skill. He said they could fish Friday afternoon.

Friday morning dawned with some clouds but just a light wind. Just after breakfast I decided to get some shrimp for bait and check out the Intracoastal at the same time. I drove down to Clyde Phillip's between the bridges and bought the shrimp after I had surveyed the waters and determined that they were calling my name.

I pulled into Dudley Marina's for a few weights and hooks. I was the only customer vehicle parked at Dudleys. I commented on that as I walked in and was told to come back in a few hours if I wanted crowds.

When I got back in the truck, I called Brian, my morning fishing buddy to see if he was still available. I told him we could go for a couple of hours before I had to come in for some real estate work. That worked well with him since he had some things to do in the afternoon. I headed back to our house after picking up some ice.

We had the boat loaded and pulled away from the dock by 10:30 PM or just before high tide on the White Oak. We had decided to make this a reconnaissance trip with the hope that we could spend a full day fishing the week after Labor Day.

As luck would have it, we had to stop and catch a couple of bluefish in Swansboro Harbor to satisfy ourselves that all the ones breaking the surface all over the harbor were too small to keep.

We checked out the Inlet and surveyed the changes since we had fished there earlier in the summer. We fished a little more and then decided to go up the Coast Guard Channel before heading home. We saw more boats in the water there than we had seen anywhere.

As we were going under the bridge and heading back up the White Oak, three jet skis were coming out of the White Oak and heading into the Intracoastal. That made it feel a lot more like a holiday weekend.

We got home, docked, and I grabbed a sandwich. I finished the work I had to do just as my friend Dean and his wife pulled into the driveway. We loaded their stuff in the boat and headed back down to Swansboro. After looking at a couple of spots, we picked an inlet just off the Intracoastal. Dean's wife, Gail, actually caught a fish before Dean and I even got our lines in the water. We went on to catch over twenty croakers and assorted bottom fish. We threw them all back, but we had lots of fun catching them.

As we made our way back to Swansboro and up the river, it became clear from the increased boat traffic that this was going to be a boating weekend in spite of the clouds that had rolled in during the afternoon.

Saturday morning blue sky once again held sway on the White Oak. At my Friday stop at Dudley's I had purchased a couple of top water lures to use in chasing red drum, We have some big oyster rocks not far from Bluewater Cove. When they flood at high tide, they are a pretty good place to chase red drum.

As I slid my kayak in the water I had high hopes that I might be at the right place at the right time in my red drum chase. With the north wind at my back, I had an easy paddle out to the river. There were a couple of boats already fishing in the general area, but they were not in the spot that I had in mind. Just as I got in position, I noticed the wind starting to pick up.

I was probably 100 yards or more from the marked channel that takes you from the Whtie Oak to the Intracoastal, but the combination of half a dozen boats headed out the river at full throttle and an increasing wind made kayak fishing a marginal proposition. While small wakes are mainly an annoyance in a skiff, in a kayak they cannot be ignored. After forty-five minutes of fighting to stay in position, I headed back towards the quiet waters of Raymond's Gut and Bluewater Cove. It ended up being a hard paddle since I was paddling right into the wind, but it was good exercise.

It probably took me as long to paddle home from the middle of the river just outside our inlet as it did for us to come the three and one half miles from Swansboro in the skiff at full power on Friday. Still both were lots of fun. I posted some pictures of my kayaking adventure.

I feel like I am tuned up and ready for the fall fishing season. Now if the weather will just cooperate, I suspect that my pulse will start to race each time that I head through my gateway to fun. It will not matter if I am in the skiff or the kayak, I will be ready for some action.
Posted by Ocracokewaves at 12:40 PM