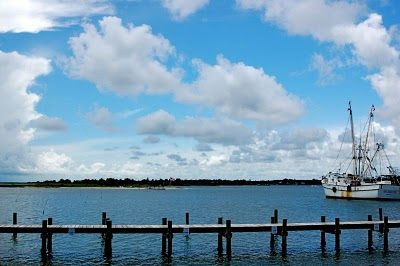 I like to think that blue skies are one of the reasons beside the beach that people come for visits in the summer. While there are a lot of treats on the coast like fresh seafood, when we have the blue skies they are free. In the winter we often have weeks of clear blue skies, but in the summer we are more likely to have blue skies early in the morning and then a tug of war between the blue skies and the clouds. That was the case when I snapped this picture near Clyde Phillips Seafood between the bridges in Swansboro. The picture was taken just after noon a few days ago. That morning I had gotten up to beautiful blue skies over the White Oak River. By the time I took the picture along Route 24, the river had a pretty solid cloud cover. The only completely blue skies seemed to be down the Intracoastal towards Hammocks Beach. Finding blue sky is always a guessing game.
Visitors to the coast know all about the blue sky guessing game. Usually weeks before you are set to enjoy your home along the shore, you bet on a certain week and hope that the weather will be great.

So far this year, I cannot think of a week that has been a washout. While we have had six inches of rain at Bluewater Cove this July, it has come in short intense storms. I can only think of one day which qualified as a rainy day.

As residents, we play a different kind of blue skies game. While we all have access to more weather reports than we can read, the only one that makes any sense is the one that is going to be right. The problem is that you never know which one that is.

There are many days when we plan to go out with our boats and have to play it by ear. You look at the weather reports, check the sky and wind, and then make an educated guess which you cover by staying close enough to home to make a run for if need be.

We have done that several times. We will even gamble that we can fish for a few hours before a front comes through by fishing five minutes from home. So far with a weather report in hand and watchful eyes, we have been able to be back at the dock before any serious rain.

Our closest call came a few weeks ago. We were fishing near the Point and hoping to leave around 3 PM so the twenty minute trip to our dock would put us home well ahead of the predicted 4 PM front. We pulled anchor just before 3 PM and headed home, but we had not counted on a Coast Guard safety check. We still made it home in time, but we only touched the tops of the waves, and the pouring rains came within five minutes of the last of our gear being stowed.

Many times we leave home to find the weather better over on the beaches than it is on the mainland. It seems to run in spells. Often the storms build over interior North Carolina and then roll towards the coast. The trick is to leave home early and try to be back at the dock before the afternoon storms.

Weather is never really predictable because just when you start counting on the storms coming from the land, they will trick you and start coming up the coast.

Last night as we were driving back to the coast from the Virginia mountains, we seemed to be shadowing a huge thunderstorm. As we settled into the hour drive from Interstate 40 to Cape Carteret, I wondered if the storm would catch us, but it seemed to disappear.

It was with great surprise that I got up this morning to find a steady breeze of 25 miles per hour. When I checked my rain gauge, I saw that we had two inches of rain while we were away. Apparently the two inches of rain never made it to the area not far from here in the Croatan National Forest where eight hundred acres of forest have already burned.

This morning with clouds over the river early, we headed east along Route 58 up the Emerald Isle Beach. By the time we reached 14th Street, the skies were completely blue and the winds were still blowing.

My guess is that this was a good beach day. The winds likely made it a challenging day for fighting a fire. Perhaps the winds will drop as we pick up some addtional rain tomorrow.
Posted by Ocracokewaves at 8:33 AM