The Rewards of the Crystal Coast 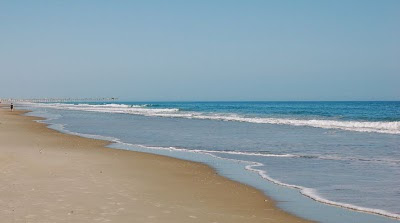 Last night I got a call from someone living in South Dakota. If you have been following the weather, you know that blizzards and flooding have been dealing alternating punches to the northern plains. After talking for thirty minutes, it was pretty clear that the weather was not the problem. My new friend wanted to live in a place which felt like home. He was looking for people who accepted him as a neighbor. He was tired of being an outsider in his own town. The blizzard might have been the straw that made him pick up the phone, but the desire to feel part of a real community certainly was more important than how much snow was falling. You can live in an area where people are very friendly, but for a number of reasons it never feels quite like home. My wife and I lived in Canada for several years. We had wonderful friends there, but it just was not home.
After Canada we moved to Columbia, Maryland, but it just was not us. Finally we ended up in Roanoke, Virginia which felt much more like home. That is hardly surprising since we both grew up just a little over one hundred miles from there in Mount Airy, NC.

Still each time we visited the Carolina coast, I felt like I was going home. I doubt that I can adequately explain it, but the secret lies somewhere between how people greet you and the honest concern they have for your well being.

Perhaps caring for each other happens a little easier out here on the edges of the beach. While we live in a very temperate climate, we also live close enough to nature to know that we are far from invincible. No one here on the coast believes they are a master of the universe. We have seen what the waves and storms can do. That makes you humble.

You can take the same people and put them on a New York sidewalk, and they will probably avoid making eye contact. Yet here on the Crystal coast, people walking the beach will often stop have conversations with complete strangers. It is certainly within accepted behavior to walk up to a solitary fisherman and ask if the fish are biting. You are likely to find out about the fish and a little more.

While our pristine beaches are a reward in themselves, it is even more special to be able to share those beaches with people who enjoy them just as much as you do.

I have often said that the reason Carteret County is such a great place to live and visit is that there is a magic self selector operating. For some reason, we have never been trendy enough to get the always annoying folks who have to be first to enjoy every hot trend.

We are just enough off the beaten path that people have to think about coming here before they come. For years the Crystal Coast has been a secret that was shared from friend to friend.

A family would discover the area and vacation here for a few years. Then they would buy a second home and perhaps eventually retire here. Eventually their neighbors would start visiting, and soon another couple would find a home that they liked.

While the Crystal Coast never saw explosive growth like many areas, we have managed to grow through the addition of people who really wanted to be here and who also fully appreciated the many wonderful things about the area.

While a lot of people come for the beach, many people stay for the peace and quiet and the friendliness of the area. You do not have to live here very long before the waitresses and shopkeepers start to remember you. Yet this is an area where individual privacy is truly valued. For the most part people tend to their own business unless they see someone who needs helping.

This is also an area which enjoys getting together and having a good time. The community festivals seem to bring out the best in people. Whether it is eating barbecue, steamed oysters, or mullet, people have a great time just getting together and talking even if the talk is only about the weather.

As you talk to residents, you find that people are proud of living here on the coast. I interview students for college so I often get a bird's eye view of how the next generation views our area. I am happy to report that there are a lot of our young people who also think the Crystal Coast is a special space.

That is a good sign for the future. This is a special place which will need some protection if the next generation is going to enjoy it as much as we have. Still as my tee-shirt says, Carteret County is a secret to share.
Posted by Ocracokewaves at 5:42 PM