Driving Into the Sun 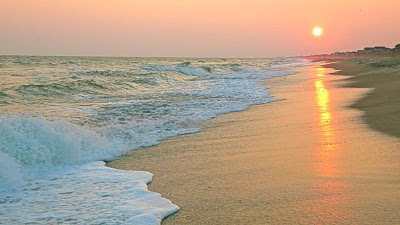 Lots of people get really confused about directions on the Crystal Coast. People have a very hard time understanding that the beach is south and not east. When the sun comes up way up the coast and not straight out in the water, it seems as if it is a huge mystery. Since I am also a photographer, it actually makes my job a lot easier. I actually can catch a very nice sunrise and sunset like the one above from almost the same spot for much of the year. I might be a little prejudiced, but I think that having the sun rise at one end of our beach and set at the other end makes the Crystal Coast special. It is almost as if the earth's orbit is perfectly aligned to let our beaches get the best sun coverage. Still it is a challenge for newcomers to remember that the beach is to the south. There is one way to have that burned into your mind.
It is actually something that we do a lot, but you should not try it without some patience and very good sunglasses. My wife and I often spend the last thirty minutes before sunset driving west on Highway 58 from Atlantic Beach to Emerald Isle.

Though we are on the highway, we refer to it as driving down the beach. This time of year is a great time to do it because traffic is very light.

The temptation is to take Highway 24 and its four faster lanes back home after visiting Morehead City. Since we long ago converted to beach time, it is usually easy for me to resist the faster route because by going that way you end up only smelling the water at Gales and Broad Creek.

Actually I prefer the more leisurely and scenic way of driving. By going back by riding down the beach into the sun, we are by the water the whole route.

We also rarely make the journey without stopping a few times for photographs or just to get out and smell the water. By May we are often wading in the water which means we sometimes lose track of time completely.

We did our most recent trip into the sun this past Monday after a stop at Staples and the new Harris Teeter grocery store in Morehead City. After I practically dragged my wife out of the grocery store, she figured out that I wanted to take some pictures along the shore before the sun disappeared.

Getting over to the beach from Morehead requires crossing Bogue Sound. The view is always stunning from the big bridge. On Monday it was almost blinding from the bright sun to our right as we crossed over to Atlantic Beach.

As we turned right at the stoplight onto Highway 58 and headed west while leaving the center of Altantic Beach, the sun made visibility almost impossible. Once in a while a twist in the road gave us a little relief, but most of the time we were driving right into the sun and the wonderful haze of the early summer that surrounded it. While it was not easy, it certainly made me forget the recent cold days. I felt like summer was just around the corner.

The skies were so clear and the sun so bright, that it was impossible to take a direct shot of the sun. I kept driving thinking that if my timing was just right that I could catch the sunset from a beach access that I often use for sunset pictures. However, the driver of the car in front of me seemed to have trouble driving into the sun, or perhaps he also was just enjoying the ride. His speed of five miles per hour under the speed limit slowed us some and the sun dropped behind the clouds just enough that I did not get the sunset shot that I wanted.

I did get a nice shot of Bogue Sound while crossing the bridge at Emerald Isle, and it was still a fun trip down the beach. The great thing about sunsets is that they roll around fairly regularly so it will not be long before we give chase again.

I seriously doubt that any who drove the almost twenty miles or so down the beach with us would have any trouble instantly telling which way is west. It is likely burned into the backs of their eyes along with the memory that south is toward the beaches, and north is towards Bogue Sound.

This past Monday was a driving into the sun experience that none who were there will forget.
Posted by Ocracokewaves at 7:11 PM