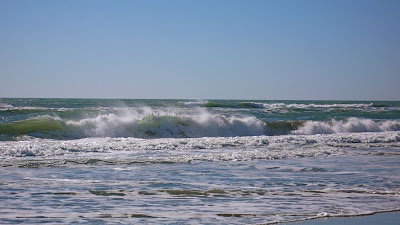 It was so nice this morning that we headed over to Emerald Isle to check out the beaches. I wanted to visit one of my favorite spots, Third Street Beach. It has a small parking lot, but I like the the shape and slope of the beach there. In the summer we find it a great place for shell collecting. I checked the temperature when we got out of the car. I was not surprised to see a reading of sixty-one degrees Fahrenheit. It had to be warm. Even with a light breeze, I was comfortable in just a tee-shirt with long sleeves. I walked down to the water to take a few shots. I had the beach to myself for several minutes before a couple with a small dog walked by the spot where I was trying to catch the sun on the waves. As I was standing on the beach with the sun warming my back, I could not help but remember the weather forecasts that I read earlier this morning.
The reports were calling for heavy snow from northern Pennsylvania and New Jersey through New England into the Canadian Maritimes. The weathermen at Accuweather had this to say this evening. "The addition of cold winds wrapping around the low has turned the storm into a full-blown blizzard that could paralyze Cape Cod New Year's Eve and Canada's Maritimes overnight and Thursday."

Having lived through a number of those blizzards during my years in New England and Canada, I can vividly remember how cold and nasty a true blizzard can be. I also know that many of the areas adjacent to ground zero of a blizzard also do not fare very well. They usually have winds almost as strong and temperatures nearly as cold. The snow might be a little less, but even with all my years in the north, I never did figure out how to measure how much snow you are getting when it is snowing horizontally.

Given that this December has turned out to be a brutal introduction to winter for the northern part of the country, I was not surprised to see a higher than normal number of vehicles from New York and New Jersey in the parking lot at the grocery store. Our sixty-one degrees today must have felt pretty good.

In fact the temperature was so nice that we went for a walk on the Tideland Trails at the Croatan National Forest Access point in Cedar Point. There were a fair number of people trying to walk off some of their holiday meals. As we got out to one of the exposed areas on the trail we could feel the northerly winds begin to increase.

I guess misery loves company so we will have to take a shot of cold air tomorrow. At eleven PM as I am writing this in Bluewater Cove just a couple miles up the White Oak River, the temperature has dropped to thirty-five degrees Fahrenheit.

That is a pretty substantial drop, but as I glance at some of the temperatures up the east coast, that thirty-five degrees looks relatively warm.

My friend in State College, PA is looking at nineteen degrees and snow. My college roommate in Forked River, NJ is thirteen degrees cooler at twenty-two degrees Fahrenheit. In my Boston, another college friend is enduring a balmy nine degrees with blowing snow. She had to clean snow from her roof after the last storm so I am pretty sure this one was not a welcome visitor.

Even here in North Carolina, my hometown of Mount Airy has cooled to twenty seven degrees. Some relatives in the area called to say that Boone had seen winds as high as seventy miles per hour.

Then there are our poor Canadian friends in Halifax, Nova Scotia. They are under an official blizzard warning with about one foot of snow expected and winds of fifty miles per hour. I did my tour of duty in the north so I know the only true escape from the cold is to head south.

I think tomorrow we are scheduled for our sympathy cold weather. We are only going to make it up to the upper forties. However, New Year's Day seems to be the only really cold weather we will see for the next week. We should almost make it to sixty on Friday. By Sunday we are back into the sixties.

If the winds stay calm, I am hoping for a nice bike ride which is a lot more fun than shoveling snow.

At this point in my life, the snow that I enjoy the most is what I see in the pictures my friends send me. Living on the Crystal Coast has been the best protection against snow that I could imagine.
Posted by Ocracokewaves at 1:43 PM